Ahead of Presidential visit, Ambassador Foh takes up duty 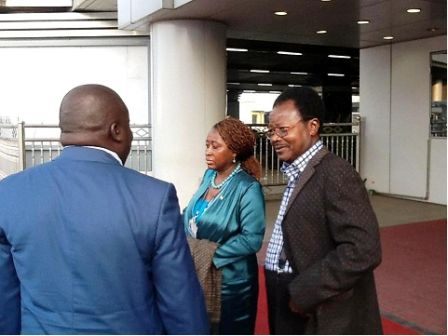 Ahead of Presidential visit, Ambassador Foh takes up duty

Received by staff of Sierra Leone Embassy Beijing, Ambassador Foh was also, on behalf of African Ambassadors in China, received by   Ambassador Sedozan Apithy, Ambassador of Benin and a representative from the Embassy of Guinea in China.

Meanwhile, taking formal leave of the President past Monday, Ambassador Foh was encouraged by the President to be a “modern day ambassador who does not engage in wining and dining, but to bring home the fruits that will unleash sustainable development and transformation of Sierra Leone, saying “We look forward to China working with us for the way forward as we are in the process of reforming the United Nations Security Council”. (Courtesy State House Communications Unit)

The President is also slated to, amongst others, meet with Chinese enterprises and representatives of financial institutions and will be delivering a speech, as distinguished speaker in the opening session of the World Peace Forum at Tsinghua University.

With the theme “International Security in a Changing World: Innovation, Coordination, Development”, this event is expected to be attended by Chinese national leaders as well as leaders from other countries.

This visit by His Excellency President Koroma is expected to bring more goodies for Sierra Leone given the apparent commitment of China to support Africa’s development and with   positive presence of Chinese companies in Sierra Leone. As recent as about two months ago, the Government of Sierra Leone signed a Memorandum Of Understanding with China Kingho Energy Group, that has a potential of investing over 6 billion dollars in Sierra Leone, especially in the area of infrastructure.

This latest investment potential for Sierra Leone is in addition to existing ones, coupled with direct Chinese government support to Sierra Leone in areas of agriculture, energy and infrastructure as in the multi-million dollar new airport on the mainland.

The President will be accompanied to China by a number of state officials.