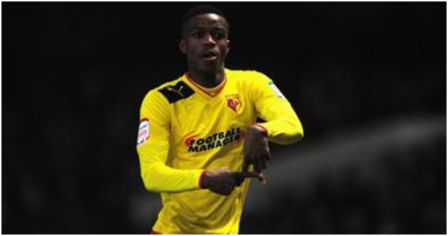 Sierra Leonean born Nathaniel Chalobah (in photo), wonder striker in the first-half against Leicester on Friday, has kept the Watford race for automatic promotion alive in the Npower English premier league.

The 18-year-old midfielder, on loan from Chelsea, smashed home a 30-yard drive two minutes after Troy Deeney had poked the ball in from six yards to lift Watford within one point of second-placed Hull City.

The Sierra Leonean who came through the Chelsea academy, having been there since his pre-teens accounted for his fifth goal of the campaign that separated the two teams. Leicester goalkeeper Kasper Schmeichel admitted afterwards that he didn’t even see the shot.

Watford is a point behind Hull City who lost on Saturday to Barnsley, in the race for premiership football next season. During the 2010–11 seasons Chalobah featured for Chelsea reserves while still a schoolboy, winning the national championship with the side that season.

In 2011–12, Chalobah regularly captained both Chelsea’s reserve and youth sides, and led the 2012 FA Youth Cup winning side.

He signed a professional contract with Chelsea in January 2012 shortly after turning 17, lasting until summer 2014.

He was an unused substitute for the Chelsea first-team at the age of 15, in their League Cup clash against Newcastle and travelled with them to the 2012 UEFA champions’ league final in Munich, which Chelsea won.