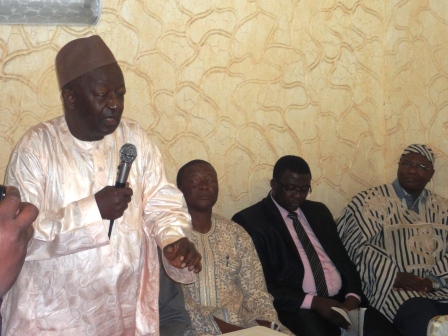 The Sierra Leone Embassy in Riyadh in collaboration with the Sierra Leone Nationals’ Union (SLNU) offered special prayers for their beloved country Friday, 26th April, 2013, a day before the 52nd Independence Anniversary celebrations.

On display for the evening’s occasion was an assortment of brightly lit facial expressions, flamboyant dresses, embracing handshakes, a throbbing camaraderie, enthusiastic spirits of nationalism almost electrifying in nature; all wrapped up in an overwhelming sense of belonging.

They recited the Holy Qur’an at the Chancery Building in the District of Al-Maseef in the north of the Capital, Riyadh. A good number of Sierra Leoneans, friends and well wishers from across the city assembled themselves to celebrate the momentous occasion.

In his welcome address, the Ambassador, Wusu B. Munu said he was bringing greetings to all Sierra Leoneans in the Kingdom of Saudi Arabia on behalf of the President, His Excellency Dr. Ernest Bai Koroma.

He congratulated his nationals in advance on the country’s 52nd Independence anniversary. The Ambassador also paid a glowing tribute to the national leaders, who won political independence from the British colonial rule on 27th April, 1961.

Sierra Leoneans praying for their country

He described the event as worth celebrating as according to him, Sierra Leone has moved beyond several hurdles especially the 10- year rebel war that officially ended in 2001, adding that, Sierra Leoneans should be proud to celebrate their rich cultural heritage.

He informed his audience that after a successful transformation in both governance and institutional sectors, remarkable achievements have been made so far since independence, adding that, all leaders since that time, deserve commendation.

A cross section of men at the ceremony

A cross section of women at the ceremony

In his remarks, President of the SLNU, Uthman Kargbo described the attendance as a “true spirit of patriotism.” He said he was very pleased with the patriotic sentiments always expressed by Sierra Leoneans in the Kingdom when it comes to the reflection and celebration of the country’s Independence Day.

Leading the prayers, one of the elders in the community, Sheik Mohammad Bailah Bah appealed to the congregation to recite the Qur’an with humbleness and piety. He also appealed to them to pray fervently for their leaders, peace, unity, stability and development in Sierra Leone.

The colourful gathering was chaired by the proactively calm diplomat and First Secretary of the Embassy, Salamu Koroma. Earlier, he gave a brief history of Sierra Leone before it gained Independence. Koroma added that Sierra Leone stands on the shoulders of those patriots who fought for “our freedom and sovereignty as a nation.”

Most of the attendees say they were very proud as a nation to celebrate 52 years of existence as a cohesive nation with religious and political tolerance.

The vote of thanks was given by one of the community elders, Hamid Tunkara.

Food service at the celebration