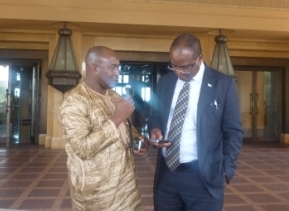 In a brief interview with this writer at the Dubai International Airport shortly before his departure to Freetown last week, Dr. Samura Wilson Kamara said Sierra Leone and the United Arab Emirates (UAE) “have underscored the importance of forging stronger and deeper international cooperation.”

He added that: “My President, H.E Dr. Ernest Bai Koroma had very productive discussions with my UAE counterpart, His Highness Sheikh Abdullah bin Zayed Al Nahyan  and their discussions also offer us a great opportunity to renew our relationship and take it to a different level of engagement and cooperation.”

For his part, Minister of Information and Communications, Hon. Alhaji Alpha Sahid Bakarr Kanu who doubles as Presidential and Government Spokesperson also described both visits to the US and the UAE as “worthwhile and very successful”.

Hear him: “The visit in America in effect, is one of a kind. It’s a cardinal endorsement of the good governance, democratic principles, social and economic developments in our country.  It endorses the success of the agenda for change and heralds in the agenda for prosperity.”

The Information Minister added: “To start with America; you couldn’t have started any where higher than that.  On the question of the visit to the UAE, we would be happy with the results because here we have come to look for solutions and to find ways of improving our energy generation in the country.”

“And the promises and commitments that have been made since our arrival have been very good and encouraging.  The President is happy with both visits.  President Koroma is going back to Sierra Leone to the people as they say in England coming back home with a puck barrel.”

It would also be recalled that Sierra Leone made impressive gains in the latest United Nations Human Development Index (HDI) launched a couple of weeks ago. Observers say the country is unprecedentedly moving from the bottom of the UN Human Development Index (HDI) year in and year out under the leadership of His Excellency Dr. Ernest Bai Koroma. It has jumped above ten other countries and is now ranked at 177 out of 187 countries. What does the Government make of this? This is what Hon. Alpha Kanu had to say:

“I think it’s an endorsement again of the President’s dexterity in management. Coming from the private sector, he knows how to make things move. Sierra Leone was at the bottom of the United Nations Development Index. In less than 5 years, it has moved in 10 places. And not only that, it’s the fastest growing human development index in Africa with 3.54 against an African average of 1.01”.

The Spokesman continued: “At the same time, President Koroma managed to move the country forward in less than 3 years after he became President.  For the past 3 consecutive years, Sierra Leone was touted as the fastest growing economy and the hottest economy on the planet. In 2011, it was 35 percent GDP growth and in 2012 it was 19 percent and that growth is continuing. And that continuation is going to be underpinned by the launching of the agenda for prosperity in April.”

It could be recalled that during the Dubai visit, the President held discussions of economic and investment interests with the Minister of State and CEO of MASDAR, H.E Dr. Sultan Al Jaber, another Minister of State, Her Excellency Reem Al Hashimy, the Director General of the International Renewable Energy Agency (IRENA), Dr. Adnan Amin, the Acting Director of the Abu Dhabi Fund for Development, H.E Mohammed Salem Al Suwaidi, the Executive Director Strategic Planning in the Royal Group of Abu Dhabi, Mr. Peter Abraham and Mr. Filip Matwin of the same group attached to the Science and Technology Department, Chairman for  TAQA Global (an energy company) Mr. Hamad Hur Al Suwaidi, the CEO of Exceed Industries,  Dr. Kamel Abdullah, Chairman of  Mulk –Ogi Holdings, Mr. Shaji – Mulk, among many top officials.