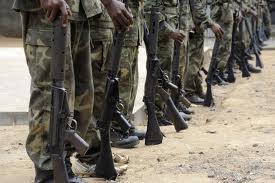 Very recently, I travelled to Pujehun and out of my usual curiosity, decided to visit the barracks and I never regretted I did. Right from the well-manned gates, I started experiencing the decency and discipline of the well attired personnel.  After going through a very rigorous interrogation that no chicken-hearted man would have withstood, I was granted permission to see the Commander of the battalion, Lieutenant-Colonel I.S Kamara on strict condition that I should go through the Adjutant, Lieutenant Hamid Bangura.

As soon as I entered the big barracks, I began to realize that that Lieutenant-Colonel Kamara is a diligent, decent and well organized Commander whose good works vividly reflect on the barracks. I was highly impressed by the clean and well organized state of the barracks. As I strolled towards the Adjutant’s office and saw soldiers busy working, it dawned on me that the International Military Assistance and Training Team (IMATT) and other organizations that helped to reform our army did not waste their time and efforts; their efforts are now bearing the expected fruits.

I then met the Adjutant who ushered me to the Commander after investigating my mission. From the brief conversation I had with him Lieutenant Bangura appeared to be classical example of a well trained and very intelligent soldier as he was speaking very good English.

When I finally met the Commander, my admiration climaxed as I found him to be a young, dynamic and calculated officer who is loved and held in high esteem by his subordinates who surrounded him protectively.   As I started interviewing him, I realized that he is also academically inclined. The Lieutenant-Colonel assured me of watertight security in the area under his command.  The only thing he told me that tainted my visit was that they were receiving lukewarm treatment from Pujehun residents who often fail to invite them to important occasions, citing the glaring example that they were not invited to the annual sports of the Saint Paul Secondary School which was in progress as we were conversing.

President Koroma arrives in US for...