President Koroma arrives in US for talks with President Obama 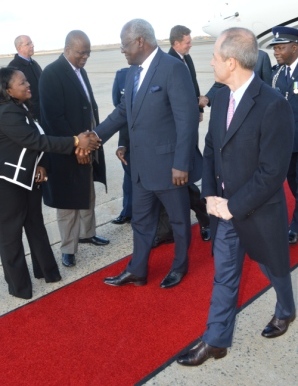 President Koroma arrives in US for talks with President Obama

Sierra Leone’s President Ernest Bai Koroma Tuesday March 26, 2013 arrived at the St. Andrews Air Force Base (AFB) in the commonwealth state of Virginia, on a three day official working visit to the United States of America at the instance of the leader of the most powerful country in the world, President Barack Obama.  (President Ernest Bai Koroma proudly working majestically on the red carpet and in warm handshake with Counselor & Head of Chancery Isatu Aisha Sillah)

President Koroma’s arrival coincides with the arrival of three other Heads of State of Senegal, Malawi and Cape Verde, who were also invited on the same ticket, with enviable democratic credentials good governance and credible desirable human rights record.

President Koroma arrived at the Andrews AFB Virginia, USA  on a private aircraft and was received by US delegation led by Ambassador Owen, Mr. David Solomon head of US protocol for Sierra Leone, secret service agents and other senior Air Force personnel of the base who mounted a red carpet quarter guard of honor for His Excellency the President.

The delegation was later joined by Mr. Mamoud Idriss, who is coordinator for the Millennium Challenge Corporation Compact at State house.

During his stay, President Ernest Bai Koroma will attend several meetings with his host President Barack Obama at the White House, the Peace Corps, MCC, Joint meeting with Secretary of Defense – Hegel at the Pentagon.

President Ernest Bai Koroma is also looking forward to engaging the African Diaspora in America – through credible institutions like the CONSTITUENCY FOR AFRICA (CFA),which will seek to enhance the role President Koroma can play in harnessing the Diaspora attention towards Africa; specifically Sierra Leone.

The commitment of President Koroma to servicing the ties between African-Americans and Africa is legendary. He is the first African leader to grant a Sierra Leonean passport to an African-American descendant of slaves, whose DNA test showed  ancestral ties to Sierra Leone.

He will address some members of the US Press and grant an in-depth radio and television interview to the Voice of America, before having a round table discussion with his colleague Heads of State, chaired by outgoing Assistant Secretary of State Ambassador Johnnie Carson.

Topics for discussion include promoting democracy, transparency, economic advancement, their countries’ roles as regional leaders, and how partnering with organizations like the Millennium Challenge Corporation has helped motivate and sustain democratic reforms in Africa.

President Ernest Bai Koroma stands to be the first sitting President of Sierra Leone to be formally invited by a sitting Head of State (President Barack Obama) of the most powerful nation in the world (USA).

Meanwhile a high powered delegation from the Sierra Leone Mission to the United Nations in New York, led by Ambassador Sheku Turay is on its way to join President Koroma and his delegation in Washington DC.

Travelogue - In the RSLAF Barracks