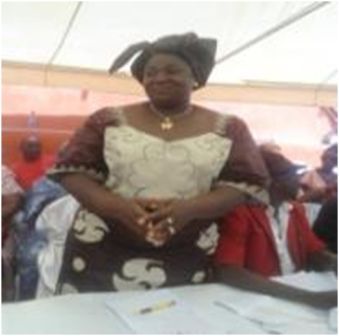 The newly appointed Minister of Local Government and Rural Development Hon. Finda Diana Konomanyi on Friday and Saturday 8th and 9th March 2013 received a hero’s welcome in the city of Koidu Kono District eastern Sierra Leone.  The programme which attracted thousands of people including paramount chiefs, Mayors and chairmen of local councils, Ministers of Government, Members of Parliament, APC party supporters, Tribal heads, and permanent secretaries among others from all districts in Sierra Leone started at the Bumpel junction, Kono, processing to the city of Koidu at Konomanyi Motor Park, Kono.  (Photo: Diana Konomanyi Minister of Local Government and Rural Development)

In his opening remarks the chairman of the programme who doubles as the Resident Minister East ,Hon. William Juana Smith welcomed all, adding that the appointment of the minister of Local Government and Rural Development Hon. Finda Diana Konomanyi by the president was not a mistake but rather a thorough representative of the president, noting that it was due to the hard work of the minister during her last term of office as chairperson of Kono District council that lead to her appointment as minister. Adding that the turnout he saw can only be compared to that of the President’s visit and that the leadership character of the minister started in her school days.

In his statement the chairman of the main opposition Sierra Leone Peoples Party (SLPP) Kono district Kpinbie said that bad news people have been hearing about Kono are over and will never come or occur again, adding that the day was a special day for the people Kono and that if they are standing in the sun to welcome the minister it is because of her good working relationship in the past with people and assured all that there will be no more political violence.

The council of paramount chiefs chairman Kono district PC Konobundor of Kangama Gorama said that he thanks President Ernest Bai Koroma for giving them a female minister of which he is sure that she will do better for them and that her appointment was not by mistake.

In his statement the newly elected mayor of the Koidu new Sembehun city council said the appointment of the minister marks a significant milestone in the political history of not only Kono but also Sierra Leone as a whole and draws the attention of the public to chapter 8 page 56 of the APC manifesto which President Koroma laid emphasis on the empowerment of women to complement the Agenda for Prosperity.  Adding that the appointment of their women including Madam Finda Diana Konomanyi, Sia Haretta Turay Minister of State in the office of the Vice President, and other key ministerial positions, are in fulfillment of what the president reserves for women in his Agenda for Prosperity.

The Mayor reiterated that the appointment send a signal with a strong message to the people of Kono that the women in this part of the county have gained recognition for a meaningful participation in governance and for a sound decision making, and admonished all women-folks including councilors engaged in active politics to remain steadfast, dedicated and committed to hard work in order that they might gain similar recognition as that of the Honourable minister and implored the minister to express their profound appreciation to the president and the vice president upon her return to Freetown for the meaningful development particularly with reference to the 20.98km city road network and 6.5megawatts that have begun to reflect in the city.

Delivering her key note address the newly appointed minister Hon. Finda Diana Konomanyi thanked all those that arranged the occasion adding that she is happy to have been appointed by President Koroma, which she said was not done by favoritism but based on her hard work during her term of office as chairperson of Kono district council.

Hon. Finda Diana Konomanyi reiterated that since her past term of office as chairperson nobody hooted her and she did not hoot anybody in the district and even with her colleague workers in the council she has a good relationship.  Adding that this term the Ernest Bai Koroma lead government is going to undertake a lot of road works and also undertake many developmental projects in the country.

Minister Konomanyi said that Kono has done it again and has set a record that will not be easy for other district to set; adding that they are in Kono to thank the people of Kono for voting President Koroma, councilors and members of parliament.  She said there has been no political tolerance in Kono but that is going to change in the name of developing the district.

The program was climaxed by a thanksgiving service at the United Methodist Church resettlement Kono. 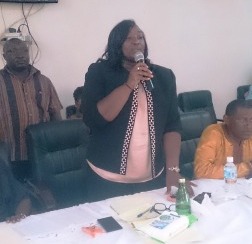