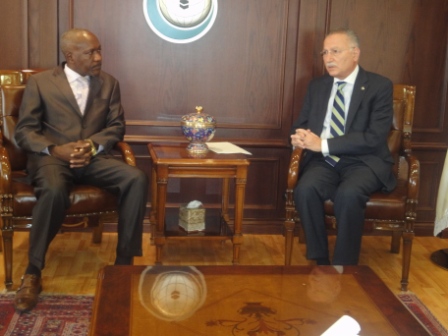 His Excellency the President Dr. Ernest Bai Koroma is no doubt an astute, shrewd and charismatic national leader. His first term of office not only proved to Sierra Leoneans that he was development-oriented, but also a good team player who gelled well with his teammates. (Photo: Hon. Nicol in a recent audience with the OIC Secretary General)

When President Dr. Ernest Bai Koroma thinks, he has thought for a very good reason. It was therefore no mistake that he appointed one of the doyens of journalism in Sierra Leone, Mr. Theo Nicol, who has practiced the profession in the sub-region and beyond, to serve as Deputy Minister of Information and Communications upon his re-election in November last year.

The seasoned journalist is a graduate from the prestigious Nigerian Institute of Journalism and a proud alumnus of the oldest University South of the Sahara – Fourah Bay College – and had travelled to and practiced in several other countries including, Ghana and the UK before he finally returned to Sierra Leone to contribute to national development through his profession.

Before his appointment as Deputy Minister, Hon. Nicol was one of the frontline journalists that contributed meaningfully to national debate on the State broadcaster, Sierra Leone Broadcasting Cooperation (SLBC) and several radio stations.

He’s also known as a regular commentator in his very popular column in Premier News and African Young Voices (AYV), which gained him recognition among shakers and movers of state affairs. His bold attempt to aspire for the governing All People’s Congress (APC) Party symbol to contest the Mayoral election in the Freetown Municipality or Freetown City Council (FCC) was an harbinger to the height he has risen.

With all fairness, Mr. Theo Nicol has proved his worth as a deserving Honourable Deputy Minister of Information and Communications despite he has been in that position for a short time.

To start with, I was heartily impressed by his rapport with the Secretary General of the Organization of Islamic Cooperation (OIC), Professor Ekmeleddin Ihasanoglu, the head of Political Affairs of the same organization, Ambassador Yahyah Lawal, the Director General of the Islamic Broadcasting Union, Mohamed Salem Ould, among other high –profile Saudi diplomats when he led the Seirra Leone delegation to the Open-Ended experts meeting on the establishment of an OIC Satellite Channel hosted at the headquarters of the OIC General Secretariat in Saudi Arabia’s second capital, Jeddah, a few days ago.

Apart from leading the Sierra Leone delegation to the OIC meeting, Mr. Theo Nicol took his time rather diplomatically to have audience with Professor Ekmeleddin Ihasanoglu by engaging him on President Dr. Ernest Bai Koroma’s “Agenda for Prosperity” and how the organization would come in to make its implementation a success story.

The Deputy Minister also did not mince matters when he narrated the success story of the fight against corruption in Sierra Leone to the head of the 57- member organization, which, to his estimation, has yielded many dividends for Sierra Leone and Sierra Leoneans in terms of domestic revenue generation as Government would use domestic revenue to fund some development projects on its own.

Mr. Theo Nicol believes that Government should continue improving on domestic revenue generation so that in the not-to-distant future, Sierra Leone will break the shackles of external support and support other Least Developed Countries (LDC’s).

The responses to the appeals made by the Deputy Minister by all those he had audience with were quite encouraging for a country which is still in dire need of external support for the implementation of highly capital intensive projects that would enhance national development, especially in the energy sector, agriculture, education, the health sector and other sectors demanding immediate reform.

Mr. Theo Nicol’s leadership character and diplomacy in showcasing Seirra Leone to dignitaries in Saudi Arabia epitomizes the wonderful role he is yet to play in governance as a shrewd politician. His classical display of diplomacy, journalistic finesse and humility in having audience with the OIC’s Scribe and several other senior officials in the Kingdom of Saudi Arabia has established him as a great national potential to watch.