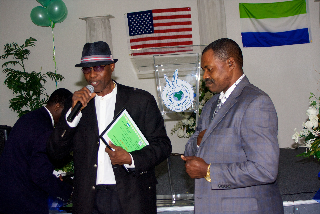 Patrick Dangawalie, the newly re-elected President of the Sierra Leone Old Footballers Association (SLOFA) based in the United States of America has named his new executive for a term of two years.

Speaking to Sierra Express Media Sports from Texas in a telephone conversation, he said he won the 2nd term appointment unopposed as other members said he had done remarkable things for the association and they all thought it fit to give him another opportunity to continue his job.

On behalf of his Association, he sent a heart felt condolence message to the Retired National Football Heroes in Sierra Leone and family members of the late-Abioseh Manning who was a legend for both Mighty Blackpool and Leone Stars.  Adding we’ll send our financial contribution through the foundation chairman-Umaru Din-Sesay and Vice-Brima Mazola Kamara.

Below are the full lists of executive members:

SLOSSA Win one, Lose one in Canada

Dangawalie, 29 others to engage Canadian...