Insecurity, it is revealed, is the million plus reasons that resulted into the escape 19 inmates from Freetown Central Prison; and escapees are said to have walked out with guns in their possession.

Facts gathered say that on the day of the escape; Pademba Prison had 15 Prison Officers on duty and 1311 prisoners as inmates.

The chorus of disapproval later provoked minds of Prison Officers into conducting search in cells of inmates without any postponement.

The search, our findings revealed, yields no fruit as nothing relating to gun was found at all.

It could be recalled that times uncountable, inmates serving sentence and remand have had field days subduing unarmed defenseless Prison Officers.

Investigation has revealed that the escape of the 19 prison inmates is never the machination of two ladies (using a black jeep) as alleged, but the making of inmates themselves, who miraculously have had access to guns from somewhere unknown.

It is disclosed that while the few Prison Officers were busy manning the yard, a shot was heard from the inside of the prison, which took everybody to surprise.

In less a minute, the escapees confronted Prison Officers on duty then, put them under gun point and ordered that they open the gate leading to the outside or face death.

Although the police are yet to make any public statement, sources say allegation linking the two unknown ladies doing unofficial visit Sunday 5th nay alleged handing over of pistols to inmates of Pademba Prison, was devised by a prisoner locked up in cells.

Surveys conducted indicate that government should be blamed for not putting in place better security considerations for the Central Prison though situate near and in between State House and Special Court.

About The Orthodox Church 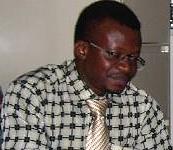