The newly appointed Minister of Internal Affairs Saturday spent his day at the Central Prison supervising the setting up of data and head count verification of inmates.

Minister Tarawallie was with Prison administrators to do a head count and cause the proper initiation of an accurate data and verification system for inmates of Pademba Prison.

The verification also brought to light the taking of photos of 1288 inmates alongside their warrant forms to enable Prison administrators and officials of Internal Affairs Ministry to ably account for persons serving sentence or are those who are remand prisoners.

In an interview with Minister Tarawallie, he reiterated government’s stance on having a secure and well structured Central Prison.

He said it is also to show to Sierra Leoneans that his Ministry is busy putting structures in place to guarantee accountability for remand and sentence prisoners.

It was revealed also that the move to set up a structured data and system verification for prisoners cut across all Prison yards nationwide.

“Knowing the number of inmates in the Prison yards will help lessen burden in the distribution of condiments for inmates,” Minister Tarawallie said.

“It will facilitate government’s efforts in knowing the exact number of prisoners allegedly escaped from the Central Prison yard recently.”

He further told our reporter that the verification will help find solutions preventing recurrence of jail break in the future.

The Deputy Director of Prisons, Cecilia Kaikai, reiterated her organization’s appreciation for efforts of the Internal Affairs Minister.

She disclosed how Minister Tarawallie has spent hours in the Prison yard, supervising, initiating and spurring Prison administrators in the conduct of the verification of inmates.

She however tagged the Internal Affairs Minister as having the doctrine of what people call a ‘man of action’ and one who looks for results.

She further reveals her organization’s instinctive belief that the appointed Internal Affairs Minister is a performing administrator.

As head counts of inmates of Pademba Prison continues, it was gathered that the total number of sentenced and remanded prisoners totaled 1282 including 6 allegedly hospitalized due to ill health.

Apart from the 19 escaped inmates, it is discovered that the yard has 14 condemned prisoners.

It could be recalled that the current Internal Affairs Minister used to be the residential Minister South, and who, during his tenure, brought improvement in the lives of youths in that region.

Sources say the Internal Affairs Minister was at the fore to advocating for the employment of youths in the Southern region.

Minister Tarawallie is said to have facilitated awards of scholarships to students pursuing courses at respective institutions and colleges.

He was also lending tremendous support to issues of agricultural concern.

It was during Minister Tarawallie’s tenure as resident Minister South that the composition of USD $100.000 tower and sculpture of erudite Madam Yoko with golden lions attached to its corners in Moyamba Town.

Because of his concern for religion, the Internal Affairs Minister, is said to have reconditioned a Mosque for Muslims in Moyamba town.

Until his recent appointment as Internal Affairs Minister, he has been supplying huge amounts of bags of rice at cost recovery to people of Moyamba.

“I intend to upgrade the standard in the Prison and Police respectively. It is President Koroma’s vision to see things change for the better. And as the Minister of Internal Affairs, I am bound that and will work towards,” the Internal Affairs Minister said.

He however called on Sierra Leoneans to join him in his pursuit to change things for the better.

The Premiership - At a Glance 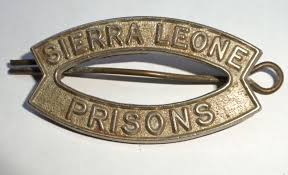