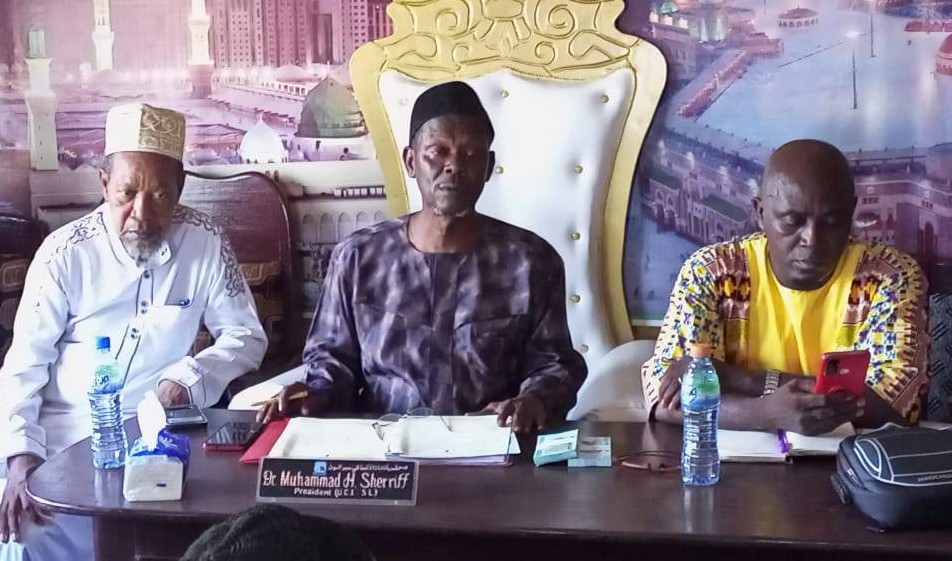 Regional Sunni Imams representing 68,000 registered members of the United Council of Imams (UCI) Sierra Leone on Wednesday July 27 2022 convened an emergency meeting at their Kissy Old Road Headquarters to condemn an Audio circulating in the Social Media, in which the President, Mohamed Habib Sheriff, is described as Anti-SLPP Party, Anti-Mende and a dangerous character to Peace and Unity in Sierra Leone.

Speaking at the meeting, Alhaji Ahmed Tejan Koroma, Regional Imam East, described Imam Sheriff, who prefers to be addressed as SLPP Imam and also doubles as the Chairman of the SLPP Attire base at Calabatown and his compatriots, Hassan Gbassay, as two unislamic characters, who are politicizing Islam in Sierra Leone for their own interest, thereby violating Islamic doctrines and the role of an Imam in any given society. He said that all 68,000 Imams registered at the council, has distanced themselves from politics, because their position is one of integrity and are expected to play a neutral role, hence they are open to all humans, irrespective of their background.

For the Islamic Women’s Wing in Sierra Leone, Haja Musu Bureh Lowleh from Kenema said that this is the second time that Imam Sheriff has attempted to bring politics into the world of religion. She recalled that the first disgraceful audio from Sheriff and Co. was when they equally posted an audio on social media informing that there were moves to establish a “National SLPP Council of Imams”. She said that this is more than fanaticism, as only lunatics behave that way. She furthered that Imam Sheriff, who is the protagonist, has never been an Imam by any category, and is poorly educated in Islamic studies.

Alhaji Janneh, Deputy Imam from Kailahun District, said that Dr. Mohamed Habib Sheriff was born at Luawe Chiefdom in the Kailahun District before he was awarded a student scholarship to study in Saudi Arabia University. He had already mastered Islamic studies in Sierra Leone, Mali and Guinea, before proceeding to Saudi Arabia University, adding that Dr. Habib earned his Bachelor, Masters and PHD Degrees in various disciplines in twelve years of academic excellence; He was employed as Lecturer for eighteen years and was named a Missionary. While in Saudi, he wrote six books, which are reference books at the Saudi Academy. Back home, Dr. Habib bought a nineteen acre land at Grafton, where he established a Primary, Secondary School and Professional and Technical College in English, and another College in Islamic and Arabic Studies.

On his part, Imam Mohamed Awolu said Dr. Habib is a leading figure, with commitment to promote Islamic activities, adding that he has never spoken about politics nor showed any interest in it either. He said his wives are Mendes and Mandingos. His passion is preaching Islam. He said the attack on Dr. Habib has no emotional stress on him. He does not feel that he should have enemies in delivering the message of our Creator, and considers the likes of SLPP Imam Sheriff and Hassan Gbessy, as unfortunate; hence their Vision, Focus  and wishes are geared towards politicizing Islam for personal gain. He furthered that on the other hand, Dr. Habib is globally recognized as an Elite, who has achieved what no Sierra Leonean has ever achieved from the kingdom of Saudi Arabia, and described him as a ‘God sent Messiah’.

The public relations officials of UCI, Sheik Ibrahim Kolleh Kamara, described the audio as Satanic and a mockery to the personality of its President, Dr. Mohamed Habib Sheriff, while the Secretary General, Mr. Max Kanu, called on the SLPP leadership to warn its Imam to retrain from such unislamic behavior.