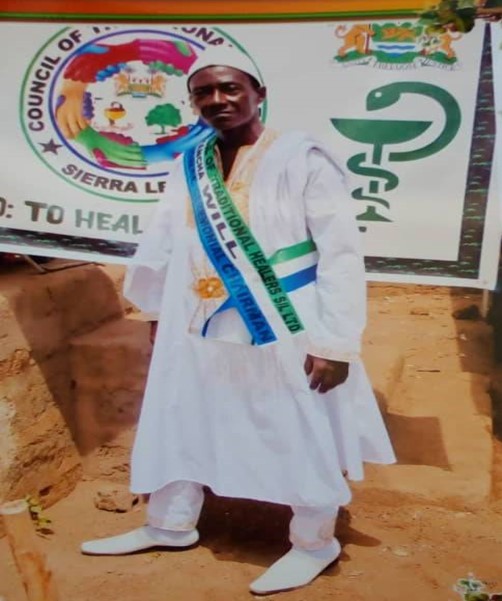 The Transparent Union Youth Advocacy Organization (TUYAO) had awarded a certificate of recognition to the appointed National Ceremonial Chairman, under the auspices of the Council of Traditional Healers Sierra Leone.

Speaking to the media after receiving the prestigious award, Doctor Will, who hailed from Kagboro Chiefdom in Moyamba District, gratified the youthful organization for recognizing him as a result of his hard work in serving humanity, adding that “I inherited this herbalism skills from my forefathers before I became a senior initiator in the Civil Defense Force (Kamajor), during the eleven years civil conflict in Sierra Leone”.

He narrated that his forefathers migrated from Sherbro land and settled at Yonibana Chiefdom, where they introduced one of the popular secret societies in Sierra Leone known as “Poro Society”, noting that he was crowned at Yonibana, as the National Ceremonial Chairman, in honor of his natural gift.

Chairman Will recalled that he was Deputy Ceremonial Chief under the leadership of Doctor Sulaiman Kabbah, as President for the Sierra Leone Indigenous Traditional Healers Union (SLITHU), emphasizing that as a member of many secret societies, he was grateful for a set of Sierra Leoneans to think about him in his little corner.

“The advocacy organization awarded me because they believe the fact that I deserve the honor”, he told journalists, and described a Ceremonial chief as a spiritual person.

Dr. Will sensitized that according to the code of ethics in the traditional world, the Ceremonial chief is the traditional head of all secret societies and traditions, and mentioned that he was happy to proclaim that he is the current Head of all ‘Sokobanas’ in Sierra Leone.

He also described the Council of Traditional Healers Union as a non-political organization, advancing that “We are traditional healers, not killers”, and admonished both senior and junior colleagues in the profession to stop presenting themselves as evil or bad people.

Dr. Will encouraged traditional healers not to get involved in ritual activities, but they should exhibit or display their professionalism through the power of the leaf. He said traditional healers are not drunkards or senseless people, but exist to serve as life and property savers, and mentioned that herbalist’s work was as Godly profession.

Doctor Will frankly stated that he was there not only to defend traditional unions, but to also apprehend anyone that might act contrary to the code of ethics of the profession.

The National Ceremonial Chairman came to conclusion by encouraging all traditional initiators, including ‘Soweis’ to not forcefully join or initiate an underage in to any secret society across the length and breadth of the country.