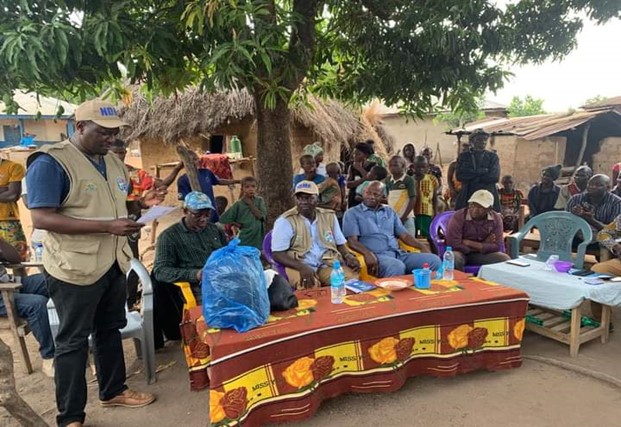 The National Disaster Management Agency (NDMA), on Thursday 31st March, 2022, continued its relief support to the Northern Region, where direct cash transfers, amounting to Two Hundred and Thirty-Three Million Leones (Le233, 000,000), was disbursed to business people in Kabala Town, who suffered a major fire outbreak that completely destroyed their businesses.

It could be recalled that on 15th January and 27th February 2022, two fire incidents in Kabala Town (Clock Tower and Cow yard section) were reported, impacting a total of 30 businesses. Each of the 30 business owners received a maximum of Ten Million Leones (Le10, 000,000) and a minimum of One Million Leones (Le1, 000,000), depending on the nature of their loss. The provision of direct cash transfer to victims who lost their businesses to either fire or other considered forms of disasters is in line with NDMA’s policy to provide such victims start-up capital to enhance their livelihoods.

Director-General NDMA, Lit. Gen. (Rtd) Brima Sesay, said that the reason why it took this long to respond to the victims, especially in Lunsar, was because the windstorm incident in Lunsar occurred on November 4th 2021, and the following day was the day the whole nation was shocked by the Wellington fuel tanker explosion that killed over 150 people, adding that the Agency was overwhelmed with the response to the Wellington inferno.

He further admonished the victims to refrain from cutting down trees or engaging in harmful activities within their communities. He said they should be vigilant in protecting their neighbourhoods by minimizing the occurrence of such hazards.

The Resident Minister of North West Region, Alhaji Alpha Kanu, commended the NDMA for its swift response to the victims and admonished them to desist from activities that are harmful to the environment. He said that just before the 2018 elections, the United Nations conducted a study and issued a report that Sierra Leone is the third most disaster-prone country in the world, adding that as such, people’s illegal activities that are liable to cause disasters are being discouraged within communities.

Paramount Chief Koblo Quee of Marampa Chiefdom said his people were happy to receive relief support from the government through the NDMA. He mentioned that the heavy windstorm experienced by his people had a devastating toll on them, but that he was extremely joyous that the NDMA was in Lunsar to respond to his people with all the items provided, adding that the support will help his people heal and rebuild.