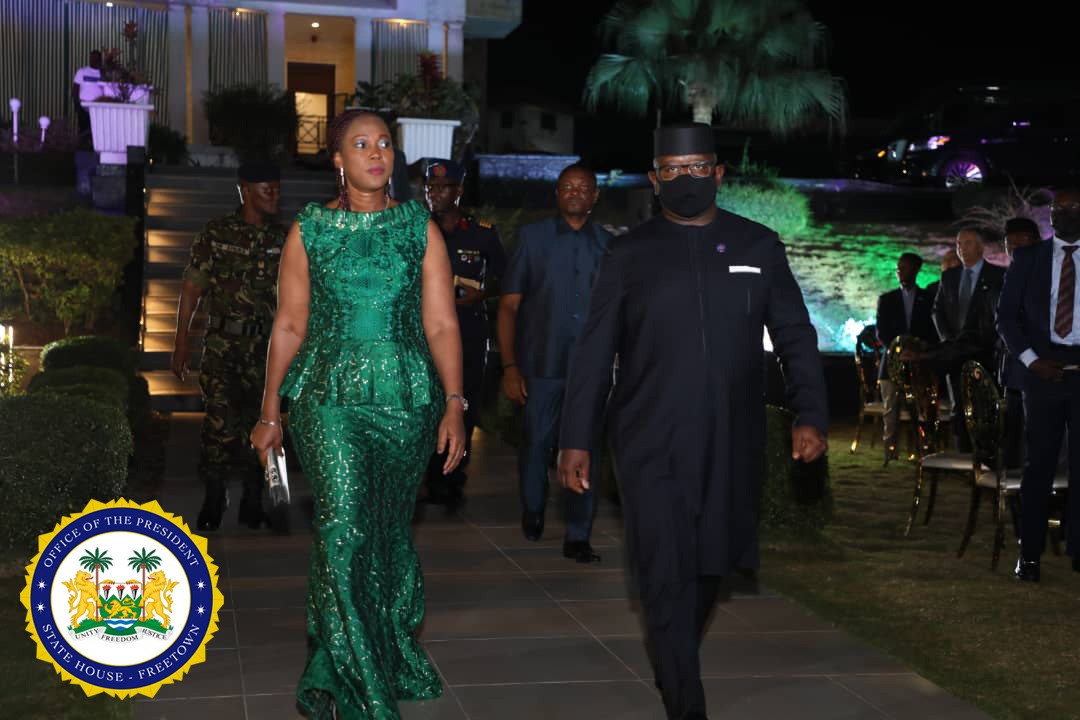 Welcoming the guests at the Lodge, Madam First Lady Mrs. Fatima Bio thanked members of the diplomatic community and development partners for gracing the occasion, saying that the event was a way of networking, thanking, and celebrating them for their individual and collective roles in the development of the country.

“Thank you very much for your attendance. I hope that 2022 will be fruitful and a good year for us all,” she noted.

United Nations Resident Coordinator in Sierra Leone, Dr Babatunde A. Ahonsi, said they were extremely grateful for the initiative of having a formal dinner with the international community and development partners. He noted that that was indicative of the importance that President Bio had placed on sustaining the friendly and warm relations that Sierra Leone had maintained with them.

He further stated that they acknowledged the important and proactive role that Sierra Leone had played in many international fora, chiefly the United Nations, Africa Union, ECOWAS, the G7Plus, of which Sierra Leone is a founding member and the current Chair, and the SDG 16Plus Forum among many others.

“I will not be able to name all of them, but I want to take this opportunity to highlight the most recent appointments of Justice Miatta Samba to the International Criminal Court and of the First Lady, Mrs. Fatima Maada Bio, to the Advisory Board of the Division for Multilateral Diplomacy of the United Nations Institute for Training and Research (UNITAR). I would like to use this opportunity to congratulate both Justice Miatta Samba and HE the First Lady on their appointments,” he noted

Dr Ahonsi also stated that Sierra Leone had always demonstrated a strong commitment to multilateralism and to the implementation of the 2030 Agenda and the SDGs, noting that President Bio should be praised for the efforts dedicated to the advancement of human capital development, especially through an inclusive education policy.

He also cited the early steps made by the government to put in place all necessary measures to prevent the spread of COVID-19 in the country and make it register one of the lowest rates of confirmed COVID-19 cases and associated deaths in the world. He emphasised that those measures did not only prove effective in mitigating the spread of the pandemic but also in building up the emergency response capacity of the health system with support from international partners, including the UN Country Team.

Sierra Leone’s Chief Minister, Jacob Jusu Saffa, thanked development partners for attending the dinner organised by the government, saying that they had consistently enacted concrete and well-meaning policies that aligned with the foreign policy objectives of the country.

He added that the goal was to ensure that the government derived maximum utility from their friends and partners, engage in meaningful partnerships at the bilateral and multilateral levels, but most importantly to engage with key stakeholders from the diplomatic community as well as donor partners in the country for a mutually beneficial relationship.

“Your Excellency, Madam First Lady, our distinguished friends, our gathering here tonight further speaks of our commitment to revitalize engagement with the diplomatic and donor community. This has indeed yielded positive outcomes. Through this effort, we have been able to progress on a number of pertinent global issues such as effective management of resources in the fight against the Covid-19 pandemic, for which valuable, significant, and timely support was received from your countries.

In his statement, His Excellency President Julius Maada Bio started by assuring his government’s commitment to further enhancing mutual understanding, perceptions, and trust with development partners, adding that they believed those were germane to sustainable and productive relations among countries and institutions.

“We believe that with mutual cooperation and respect among our country and friendly nations and partners, our aspiration and hard work towards achieving the Sustainable Development Goals for our citizens is possible. We will, therefore, seek to increase our global diplomatic footprint by seeking to deepen and broaden cooperation with existing friends while also making new friends and working with new partners across the globe.

“We have been working to consolidate and enrich our democracy and we have undertaken a significant and unprecedented number of institutional, governance, and rights reforms to that end. We are the fourth most peaceful country in Africa and we lead regional indices for our fight against corruption, investments in human capital development, expanding gender empowerment and representation, fostering democratic freedoms, and protecting and promoting the rights of persons,” he said.

He added that they were seeking to expand trade and economic relations and were, therefore, offering a resource-rich, predictable, and inviting investment ecosystem where all investments were guaranteed protection and promotion.

“Excellencies, ladies and gentlemen, Sierra Leone believes that it can contribute its fair share to dialogues on global and regional peace and development. In that spirit, Sierra Leone has received the mandate of the ECOWAS community as the sole candidate for a seat at the United Nations Security Council in the non-permanent category

“Clearly, Excellencies, distinguished ladies and gentlemen, our bid tells a powerful story – that Sierra Leone is a successful case of post-war reconstruction and peacebuilding; — that in peace, the voices of small nations matter at the highest global levels of conversations and decision-making because only those small nations can best articulate their experiences and concerns.

“This dinner celebrates you, the professionals. I want to thank you once more for everything you do in helping us navigate our complex world, in promoting good governance and trade, in fostering cultural understanding and mutual respect, and in pursuing peace and prosperity for all,” he concluded.