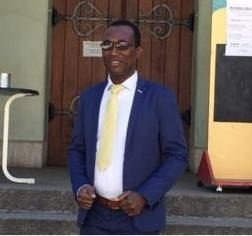 Former Minister of Political and Public Affairs in the Ernest Koroma-led administration is poised to clinch the Chieftaincy of Wara Wara Bafodia Chiefdom, Koinadugu District on May 28, 2021

Hon. Akhmed Femi Mansaray is contesting against four other candidates including Chernoh Salifu Kaday Mansaray, Hamidu Paul Mansaray, Joseph Salifu Mansaray (Gbakuwo) and Michael Salifu Mansaray all duly qualified to contest because they belong to ruling houses in the chiefdom.

“The race will be a tight one as all five contenders are major forces to reckon with in the chiefdom” said a resident of Bafodia.

Speaking to Sierra Express Media, Hon Femi Mansaray, said he was contending to provide positive leadership and unify his people, noting that he is on record for transforming Bafodia through development initiatives such as roads, light and telecommunications.

“I am developmental and have something to give to my people; I want to serve my people in a positive way and unify them”, he said.

He said he would use the knowledge he had gained in governance as the first ever son of the soil from Bafodia to serve as Deputy Minister, and his experience from staying abroad to serve his people.

“Bafodia had been deprived for long and I want to make a difference”, he assured.

He noted that even though he entered the race after his opponents, he was a threat to them, and believed that power belongs to God. “I believe in what God has for me”, he said.

Femi disclosed that he gave the longest speech to defend his throne, tracing the history from his great grandfather, Chief Lengbeh, one of five children of Pa Foday. Chief Lengbeh passed away in 1896 after a long period of rule in Bafodia and was succeeded in 1898 by Alimamy Suma who ruled for seventy years before power changed hands to another family.

Over 580 Tribal Authorities (TAs) will cast their votes for the next Paramount Chief today (28th May 2021).

Following the de-amalgamation with Kamukeh Chiefdom, which was ruled by Chief Ansu and the death of late Paramount Chief of Wara Wara Bafodia, Hamidy 1st, the chiefdom had been ruled by a Regent Chief unlike other Chiefdoms in the district.