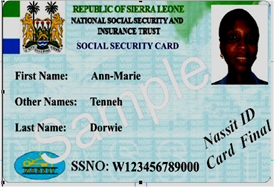 At the expiration of the first ten days of registration and verification in the western area on 15th May 2021, the National Civil Registration Authority (NCRA), has extended the initial deadline to May 22.

Amadu Juana Kamanda, Deputy Director at the Information, Education and Communication (IEC) Unit of NCRA, confirmed to Sierra Express Media that the extension was a result of consultations with various stakeholders including Civil Society and the Political Parties Registration Commission (PPRC), to ensure that maximum obtainable numbers are captured in the exercise.

He also cited the outpouring of people at the eleventh hour, which justified the one-week extension, to give every Sierra Leonean the opportunity to register or verify.

The Deputy Director explained that the national biometric ID card has multiple uses for various institutions such the National Revenue Authority, the Office of National Security, the National Electoral Commission, Immigration, Births and Deaths, the National Social Security Insurance Trust to name a few.

“NCRA is a depository of data and many other institutions can tap into our data base”, he said.

The registration and verification, he said, “is a permanent function of NCRA, which will continue at all times”, he assured.

The first phase of the controversial exercise in the western area has been bedeviled with suspicion and accusations by the opposition of a hidden agenda by the ruling government to conduct a clandestine census aimed at manipulating the electoral process in 2023.

Members of the public have widely welcomed the extension by NCRA due to the ordeal they experience in the painfully slow process with long queues in the hot burning sun.

Sierra Leoneans in the Diaspora have also raised strong concern over what they have described as the apparent oblivion by NCRA of their status in the process.