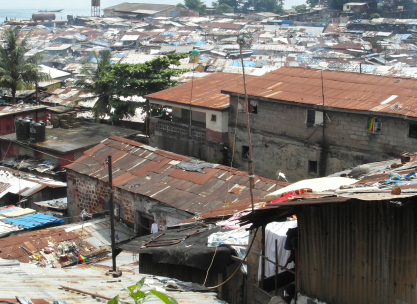 A devastating fire incident broke out at the Susan’s Bay community on the 24th March 2020 at around 6:30 am which has left over 2,000 people homeless and about 500 houses burnt to ashes.

According to eye witness account, the fire was caused due to Electricity fluctuation which resulted in the inferno that engulfed almost half of the Susan’s Bay Community.

The fire was beyond human control, spreading like wild fire in the harmattan due to the clustered make-shift aluminium structures and the inaccessibility to the community, which prevented fire engines salvage the uncontrollable situation.

Kadiatu Turay a resident of community told Sierra Express Newspaper that the community youth tried their level best to put out the fire, but their efforts proved futile as the fire spreads rapidly destroying millions worth of property and goods as most of them are traders and market women selling at the Dove Cut market, Sani Abacha Street and other neighbouring business places.

According to Councillor  Madinatu Kamara, she was in a meeting with the Mayor of Freetown when she received a call from her Ward Secretary and she quickly rushed down to the scene with her Worship the Mayor of Freetown.  She noted that although another fire incident had occurred before, “this fire incident is one of the worst in the history of the Susan’s Bay and the country as a whole.  My people are dying and in need of help”, she lamented.

Among Humanitarian Organizations that immediately responded to the incident were ONS, Red Cross, Caritas Sierra Leone, HANDICAP International. She pleaded to other humanitarian organizations and most especially the Government, to intervene.  She further clarified that 4 children and an elderly woman were yet to be found.