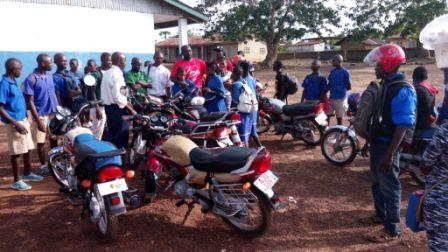 Despite real and purported efforts by successive governments and the private sector towards addressing the chronic problem of public transport, it goes without saying that the majority of residents in Freetown are going through hell on earth due to the difficulty of getting public transport to convey them to their various destinations for the conduct of official and private engagements.
Endless long queues of people are seen all over the place from east to central and west ends of the city. A good number of limited vehicles plying the routes are always overloaded with no regard for COVID measures. The problem is further compounded by an endlessly extended curfew in the name of fighting corona.
The overall impact of this perennial problem is the huge toll it has on the economy as a result of the untimely functioning of both the private and public sectors; the agony of commuters especially in the capital city of Freetown going to work late is acute and does not seem to have an end, without being pessimistic. School children and teachers as well as lecturers and students at tertiary institutions are no exception to this excruciating experience! One is left to wonder and ponder what has become of the much-trumpeted intervention of the current administration by way of providing a solution to the public transport menace.
A ripple effect of the rather painful and traumatic inadequacy in and scramble for public transport is the fact that transporters, especially drivers of “poda podas and okadas”, the most used modes of public transport openly exploit the bad situation to make it worse. They would extort rushing passengers by increasing the fares at shorter distances than normal and load above capacity, congesting the vehicle to unhuman capacity. And the police no doubt benefit from the proceeds for turning a blind eye to the anomaly.
We are appalled at this ugly state of affairs and call on all and sundry in the public and private sectors engaged in the business of facilitating the movement of goods and services either for profit or for public good, to redouble efforts and resources in that direction. The urban population is increasing by the tick of the clock, making the problem progressively difficult to tackle. Notwithstanding, given the situation as is, the need for sanity to prevail is even more urgent now than ever before. The war against indiscipline as declared by the President should be taken to the transport sector to restore respectability of the public by rather untamed public transporters.

Becoming The Envy Of Democracy &am...

When Violence Rears Its Ugly Head!