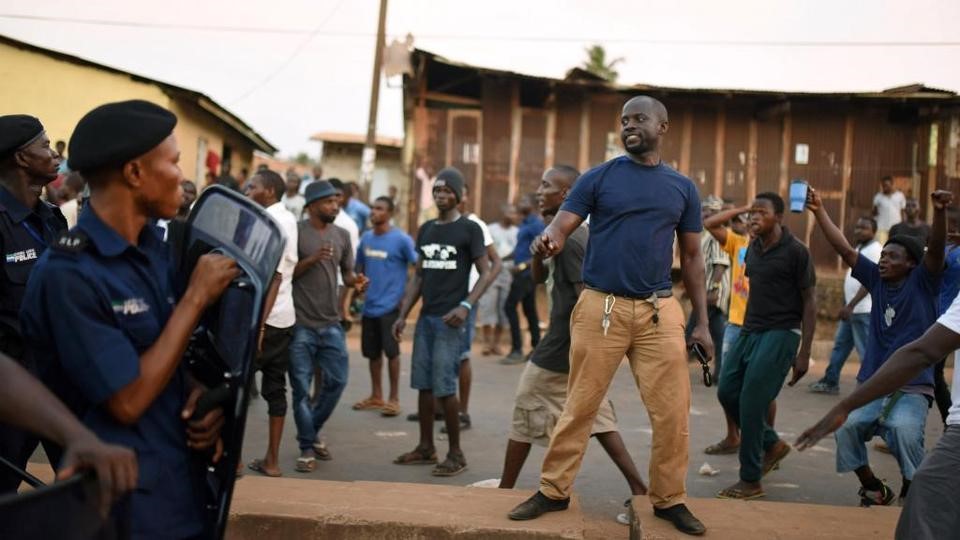 The Sierra Leone National Coronavirus Emergency Response Center (NaCOVERC) has engaged show promoters on enhanced COVID-19 enhanced regulations. This came after a huge crowd was spotted along Aberdeen Road down to Lumley beach that was engaged in massive publicity.

“The Coronavirus is still with us and there is every need for citizens to continue wearing their facemasks as part of regulations to defeat the virus, says Group Captain, Hassan SeiCoomber, Operation Pillar Lead at NaCOVERC.

Colonel Coomber was speaking to the leaders of show promoters who are now busy holding huge rallies within the city as the festive season approaches.

He called on people to adhere to enhance regulations put forward recently to which the use of facemasks is compulsory.

Colonel Coomber told the crowd of young people who were out on street to advertise their show that Coronavirus is still in Sierra Leone and across the world.

“The the only way we could defeat this virus is by wearing facemasks, maintain social distance and the washing of hands regularly.

The Group Captain noted that with the regulations put in place by NaCOVERC are still in forced and that any body found wanting will face the law.

This he said is not good for the fight and the more reason for the revised strategies lately.

Colonel Coomber said defaulters will be death with but however noted that they do not take pleasure in putting stop to entertainment activities but with blatant flouting of the regulations will leave NACOVERC with no alternative but to put a stop to it.

“What we want is a peaceful adherence to the regulations so that all of us will work together in order for us to defeat the disease. Let us continue putting on our facemasks, wash our hands and do what the health experts are telling us.

We all know this is a difficult period but we must bear with it. What we are doing is to safe guard our lives and the lives of every other citizen, he said”.

The Operations Pillar Lead encourages show promoters to also help in the fight by limited people during advertisement and shows.

“We will also be engaging the entertainment spots across the country to understand from us during this festive season. We have engaged market places before now about these regulations, and same for the Inter-Religious council on places of worship. If we all do what is right by adhering to rules and regulations governing the fight against the Coronavirus we will defeat this disease in no time, he said.”

Colonel Coomber concluded that Asian countries have been able to control the spread of the disease for the simple reason that they continue adhering to regulation more so putting on facemasks.

Dr. Blyden speaks on the need for...