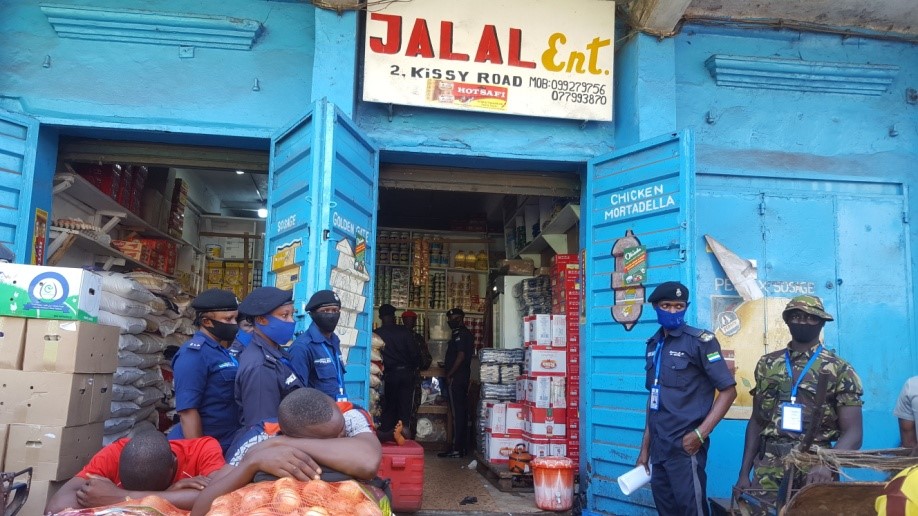 As a way of enforcing the Covid-19 regulations after the lifting of the nationwide curfew for a period of four (4) weeks, Sierra Leone Government National Covid-19 Emergency Response Centre (NACOVERC) has levied fines on 56 shops at SaniAbacha Street.

After the routine change of guards at East End Police, the new team first began their operation by targeting public buses and other vehicles plying the east – west routes for two weeks and later changed their operation to shops.

Office of National Security (ONS) John Kabba Sesay attached to the operational team said among other things that they are in that area to ensure that people comply with the rules of Covid-19 and also maintain social distance.

According to him, the shifting of the operation to shops is part of their routine. He said a week ago they moved around Sani Abacha Street, Kissy Road, Goderich Street and environs to advice and sensitize them to comply by the rules but some of them refused which is why they have been left with no alternative but to impose fines on them.

The previous day the team moved around to ascertain that after three days window period those they have fined have paid up their fines.

Sesay described Abacha Street as one of the streets in the Central Business District (CBD) where they have encountered lot of confrontation and resistance.

He further stated that based on the economic situation, some traders are saying the fine was too much for them, some paid as soon as they were find while some refused to pay unless the team moved to their business places. Payments are made through the bank.

He described the operation as a successful one noting that they were flexible in their demands based on the approach of defaulters.

A press release on Monday, October 26, 2020 by the NACOVERC stated that ALL other COVID-19 related regulations shall remain in full force and violations thereof will be appropriately dealt with. The release stated that the public behavior during this dispensation may inform NACOVERC of any eventual review of the decision.

Why Parliamentarians play a pivota...