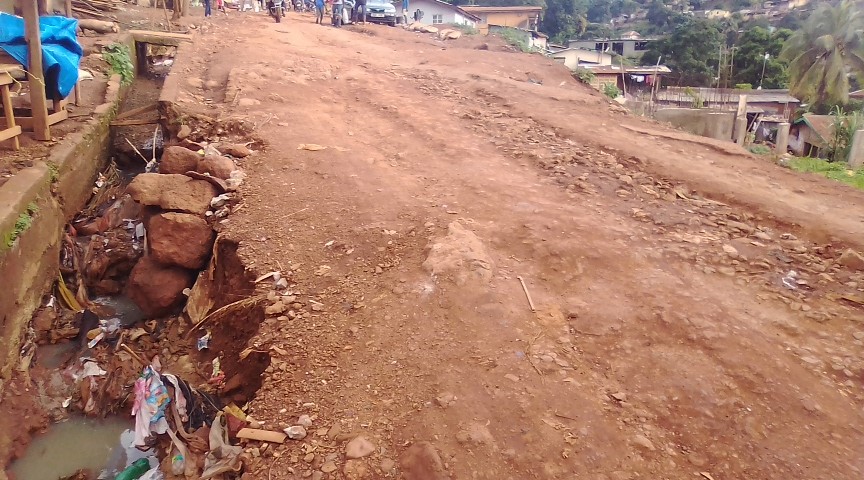 This medium can realistically revealed that, hundreds of Moyiba Residents at the eastern part of Freetown in constituency 120 have recently appealed to Government under the Sierra Leone Road Authority (SLRA) and the Sierra Leone Road Maintenance Fund to construct their road starting from Kissy Brook or PWD junction, Sesay Lane, Mambaridge, to boro pitch and upper quarry of which they described as “Terrible Road Network”.

According to many elite and local Residents who this medium interviewed, the deprived terrible road network has devastate the entire community in terms of economic viability and social transformation especially on raining seasons, noting that SLRA has aware about this ugly situation for over a decade now but no improvement was done to address the status of the road due to some unscrupulous authorities.

The disgruntled Moyiba Residents said politicians who have represented the community in various capacities have not been considering the economic viability or value of constructing standard roads which might increase economic opportunities.

They said even their economic activities at the community are been slow down due to the bad road network and that condition of living at the moment is heartrending.

“We were being exploited or demoralized hugely on a daily basis by commercial bike riders ,delivery vans, heavy duty trucks  and commercial motor tricycle with impunity in disguised that the road was terrible”, Moyiba Residents affirmed.

They said the community is venerable in terms of proper police patrols at night to curbed crime rate and that even Community Safety Volunteers (CSVs) were afraid to patrol certain areas, adding that the entire Moyiba community still has various challenges with regards to security matters, education and health due to the status of the road.

The aggrieved Moyiba Residents have intended to visit the Sierra Leone Road Authority and the Sierra Leone Road Maintenance Fund respectively as they were the two entities that are charged with the responsibility to construct roads nationwide and that they are calling on them now to at least grade the road or maintain the drainage system to avoid or reduced the deep pot-holes. They pointed out that the terrible road network has devastate ,ruined ,disturbed, affected and distressed school going pupils, university students, business women, workers including both disable persons and the aged particularly when some heavy vehicles ply the road during rush hours.

They expressed dismay to the Ministry of Land Country Planning & the Environment together with the Freetown City Council including other line Ministries, Agencies and Departments over what they described as poor planning at the Moyiba community by past administrations.

They however appealed to the government through the Sierra Leone Road Maintenance Fund and the Sierra Leone Road Authority to intervened, adding that Moyiba Community is among the most populated locality with a population of over twenty thousand electorates during the past general election 2018.

On their own part, bike riders who ply the road on a daily basis told this medium that, they are also affected greatly by the terrible, harmful and dangerous road condition and that their bikes are at high risk of damaging spare parts which is why they were charging exorbitantly to passengers because the stipulated life span of their bikes were been shorten due to the status of the road.

The concerned bike riders also appealed to government and concerned stakeholders to rescued the community from this unfortunate situation especially at the height of the raining season adding that their daily operations were been affected hugely, and mention that pedestrians especially business people and school going children were been hits on a daily due to the poor or terrible condition of the main Moyiba road.