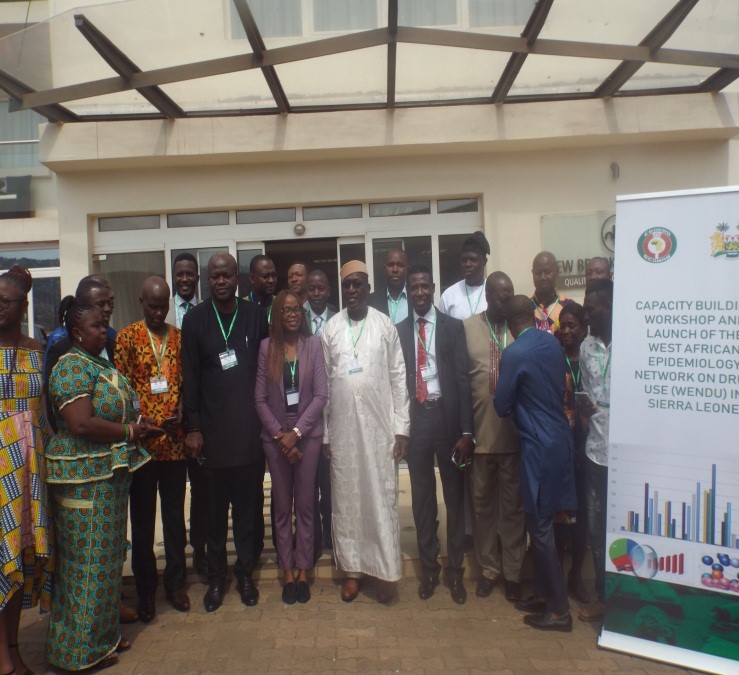 In a move to address the social, health and economic consequences of alcohol and drug use, the West African Epidemiology Network on Drug Use [WENDU] has been launched at a two day Capacity building workshop held at the New Brookfield’s Hotel, Kingharman Road in Freetown, Friday, 24th May, 2019.

WENDU aimed at providing evidence-based information for policy makers from ECOWAS Member States to not only address the highlighted issues above or collecting data in each site on selected aspects of drug demand supply but it is also expected that the network will contribute to identify changes in drug use patterns, emerging trends and communicate them to the agencies and organizations that have responsibility to address drug dependence or directly benefit from acquiring information about drug use so that new and adequate responses that address both supply and demand can be established.

In his welcome statement, Minister of Internal Affairs, Edward Amin Soloku recalled that His Excellency the President, Dr. Julius Maada Bio when addressing the well of Parliament in May, 2018 assured the nation that his New Direction Government will look into or review the laws against drug trafficking with a view to meet national and international obligations.

He described the launching of WENDU in Sierra Leone as in line with the provisions of the ECOWAS Regional Action Plan to address illicit trafficking, organized crime and drug abuse in West Africa.

The main objectives of the launch of the network, Minister Soloku said was to make WENDU operational and institutionalized in Sierra Leone so as to contribute to the Regional West African Epidemiology on drug use.

“the network comprised National Focal Points in ECOWAS Member States and Mauritania”, he told participants and continued that WENDU is a platform to foster greater exchange of best practices and common standards on drug data collection, drug supply, use patterns and emerging trends among Member States.

Apart from alcohol, and tobacco, the Minister said cannabis sativa, cocaine; heroin and prescription medicines are reported to be the most common used drugs especially among young people in the region. He said available evidence suggests that drug use is a major public health problem in Sierra Leone adding that about two-thirds of all patients hospitalized at the Psychiatric Hospital were treated for drug use disorders.

The Minister maintained that cannabis, heroin and cocaine are the three main illegal drugs prevalent in Sierra Leone and highlighted that heroin and cocaine are not produced in Sierra Leone but he continued, the country’s geographical location positions her as a transit route to South America Trafficking Organizations destined for United States of America and European markets.

He said the National Drug Law Enforcement Agency [NDLEA] which has the mandate to control and prevent the abuse of narcotic drugs, to implement the provisions of International Drug Control Conventions and other related matters primarily focused on sensitization and surveillance activities.

Mr. Soloku also deliberated on the Transnational Organized Crime Unit [TOCU] which came into existence as a result of the West African Coastal Initiative [WACI] with a unified country posture is against drug trafficking and transnational organized crime.

He concluded that the Ministry of Health and Sanitation through its mental health awareness programs and the construction of a drug treatment and rehabilitation centre in the Sierra Leone Psychiatric Teaching Hospital will help in the management and integration of drug misuse patients into the community.

Representing the Minister of Health and Sanitation, Dr. Amara Jambai maintained that the ministry was very happy to have such important forum and thanked WENDU for supplying them with the right data. “It brings about a concerted effort as a nation to have correct data”, he told participants and described the process as inclusive for the fact that the meeting attracted Office of National Security [ONS], Transnational Organize Crime Unit [TOCU] among others and promised to use the data accurately for it intended purpose.

In his presentation, Principal Programme Officer [Drugs] and Project Coordinator, ECOWAS Commission, Daniel Akwasi Amankwaa expressed thankfulness to the Internal Affairs Minister for chairing and playing key role in the 12th Inter-ministerial Drug Coordinating Committee [IMDCC] meeting that took place in Abuja on the 12th April, 2019. He noted that the program was funded by the European Union [EU] as part of a donation to the ECOWAS Commission. In fact, he said, the European Union’s support to the ECOWAS Commission in general and for the implementation of the ECOWAS Drug Action Plan in particular is commendable and discussed that there is no doubt about the dangers of drugs abuse, illicit drug trafficking and related organized crime. He lamented that the serious impact of illicit drugs on the health, development, peace and security is well recognized and advanced that the World Drug Report 2017 indicates that approximately 190,000 people die each year from illicit drug use. He described drug abuse as a catalyst for drug trafficking because he said, it is believed that without abuse, trafficking will no longer be necessary and dilated that disturbingly, new threats including clandestine laboratories that manufacture amphetamine-type stimulants, the emergence of new psychoactive substances particularly tramadol appear to be on the rise, a process he said has make the drug menace a complex and trouble one.

He disclosed that the ECOWAS Heads of State and Government in 2008 adopted the ECOWAS Political Declaration on the Prevention of drug abuse, illicit drug trafficking and organized crimes in West Africa as a demonstration of their political will to address the drug problem adding that with direct financial support from the EU for the implementation of the Action Plan, the ECOWAS Commission has strengthened the ECOWAS Drug Unit with technical staff in all aspects of control, Drug Demand Reduction, Drug Law Enforcement and legal. He discussed that WENDU will be established in all ECOWAS Member States by the end of the year or by early next year to enhance consistent and reliable drug data collection in West Africa.

He urged all to let us do our best to ensure that reliable data on drug use and related issues as well as data on aggregate drug supply are available in Sierra Leone to inform policy formulation and targeted actions.

State of Economy a Concern for Sie...