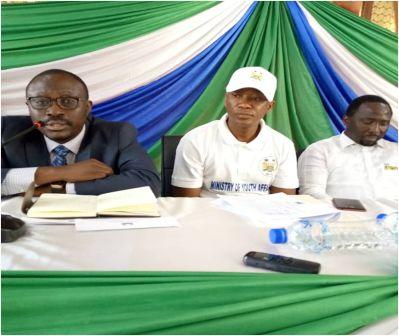 The ceremony which took place at the Atlantic Hall, National Stadium Hostels in Freetown was graced by the Minister of Trade and Industry-Hon. Peter Bayuku Conteh, Deputy Minister of Information and Communication-Lawyer Solomon Jamiru, Deputy Minister of Political and Public Affairs-Amara Kallon, Commissioner of NAYCOM-Ngolo Katta, National Youth Service Executive Director-Pateh Bah and over 70 youth groups across the country among host of others.

Speaking on the theme: “Promoting Youth Entrepreneurship in Sierra Leone,” the acting Minister of Youth Affairs, Hon.  Lusine Kallon, said the move is appropriate and timely because “we want to cater for every category of youth despite your region, religion and political affiliations.”

The dialogue session, according to the acting Minister,  will help the Ministry to record the different types of businesses in which the youth were engaged in.

He added that the discussion with the various youth groups and other successful entrepreneurs will help the Government to assess the challenges facing youth entrepreneurship.

In his assuring commitment, the Finance Minister said the Government is willing and ready to provide the funds necessary for the development and empowerment of the youth.

Whilst defining the term ‘entrepreneurship,’ Hon. J. J Saffa said youth entrepreneurship is a process through which young people engaged in doing business.

He emphasized that entrepreneurship is the process of designing or running a new business, which is often initially a small business. He noted that the people who create these businesses are called entrepreneurs.

He therefore encouraged the youth to embrace the initiative to better their living standard/s and contribute meaningfully to nation building.

“This project does not want to know whether you are an APC or SLPP but as long as you are a strategic business person the youth entrepreneurship project is for you,” the Finance Minister said.

Minister Saffa noted that President Julius Maada Bio’s promise on youth empowerment has been fulfilled as those in the Senior Secondary Schools, tertiary institutions and universities have already benefited from the President’s promise. He said after graduation they will be the next set of young entrepreneurs.

The Trade and Industry Minister pledged his Ministry’s unflinching support to the project. He said this will put premium on capacitating local entrepreneurs in line with the local content policy.

The Deputy Minister of Information and Communication-Solomon Jamiru said youth unemployment affects all African countries including Sierra Leone. He stressed that the only unique distinction is that under the New Direction, President Bio has made frantic efforts to reverse the ugly trend.

The project is expected to be launched by President Julius Maada Bio to give it a national face.

The Turkish, via boat they arrived...