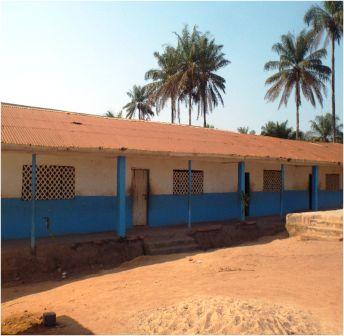 The Principal for the EBK Primary and Secondary School, Abdul Kalokoh said the school was founded in 2007 by Hon. Ahmed S. Turay of Constituency 073 in honor and recognition of former President Koroma.

‘’I took over in 2013 after the death of my predecessor’’, he told Journalists and expressed frustration that, community teachers are still teaching the children on voluntary basis as a result of lack of qualified teachers.

He explained that the primary school was approved in 2017 whilst he said negotiation is at advanced stage for the approval of the secondary school. He said there is only two approved teachers in the entire school including myself and Vice Principal, Mr. Osman Conteh.

He said they have received the Free Quality School Education materials comprised text books adding that they hoped to receive the exercise books, pen and other school materials as the course is progressing.

He said they are yet to benefit from the School Feeding Program and explained the Ministry of Basic Primary and Secondary School Education determination to improve on the system. He exonerated children that participated in the sport which he described as participatory and successful. He said the children have been proved well in both BECE and NPSE since the foundation year.

The Principal continued that they are not tasking parents to pay anything as he said; the school is catering for the less privileged children. He appealed to the Government to approve the secondary school and voluntary teachers.

One of the products of the school who is now a teacher at the Saint James Junior Secondary School, Sumbuya, Koya Chiefdom expressed happiness over the large turnout of pupils in the sport activity.

He cautioned school children to focus in their studies because he said, they are the future of the country. He joined the Principal in calling Government to approve more voluntary teachers for effective teaching services.

He advised young and old men to hands of or girls with the motive that the campaign was launched by First Lady, Fatima Bio and popularized by His Excellency, Retired Brigadier Julius Maada Bio.

He concluded by describing the athletes as good and advised them to work in line with the concept of the New Direction which is to improve education nationwide.