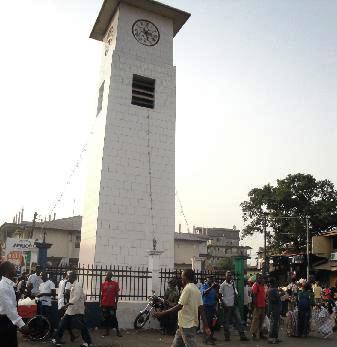 With all the monthly cleaning instituted by the Sierra Leone Peoples Party (SLPP) led Government, a pile of garbage producing a pungent smell is spreading at Eastern Police close to the Clock Tower where President Bio’s photo is pasted.

Thousands of passersby are blaming the Freetown City Council (FCC) for the delay to clear the debris which is producing unpleasant odor in the full view of the public at the heart of the city causing embarrassment to a Government that prioritizes cleaning.

Billions of tax payers money is being utilized to effect the Saturday monthly cleaning but yet  it still remains a topical issue for the fact that garbage is still found in strategic places in Freetown during that day and at night, what is responsible for it?

It could be recalled that, supporters of the then opposition SLPP, now ruling were describing the Clock Tower as decorated with toilet tiles but when the SLPP took over the mantle of governance, they removed former President Koroma’s photo and pasted President Bio’s Photo.

One of the traders, Emmanuel Sesay described the pile of garbage as nasty and causing serious embarrassment to the Freetown City Council and the Central Government. He appealed for stringent measures to be instituted to stop using the environs of the Eastern Police Clock Tower that bears the First Gentleman picture as a dumpsite.