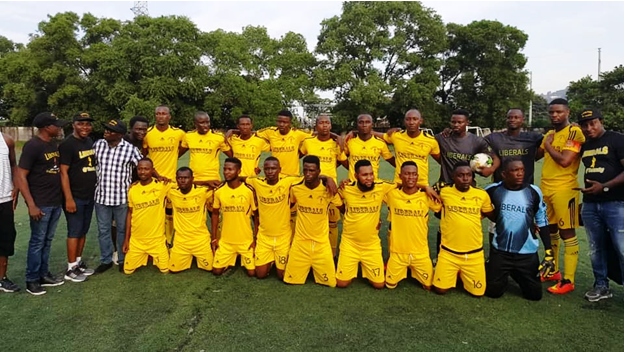 In a peaceful, entertaining and joyous atmosphere, Liberals Brotherhood Sierra Leone proved too strong for their rivals, Auradicals Foundation as the later were humbled 3-1 in the grand final. (Photo: Champions… Liberals Sierra Leone)

Chanting from the Auradicals supporters gave more fire in the fraternity derby finals; however their lead only lasted until the first segment.

Almost 10 minutes after the break, Liberals Brotherhood draws level from the penalty spot which was converted by the midfielder, Ibrahim Sorie Kamara. It was an all Liberals affairs in the area of dominance and chances created.

Two late goals from incomer, Thomas Banister and the tournament top-goalscorer, Liberator Robert Koroma gave the tournament host a deserving winning and send their supporters wild as they lift the converted golden trophy.

It was indeed an excellent ending to a magnificent beginning of a fraternity derby and the Liberal Foundation head coach, Alhassan Idriss Bangura was pleased with his side-show of prowess despite the early goal conceded.

“The Aura goal got us nervous, but I was confident as we were the better side in the area of possession and chances created. We decided to make a few changes after the break, and we are happy to secure such a well deserving victory. Thanks to Aura for good display, and congratulations to my boss for proving their might,” Coach Bangura said.

It was a disappointing one for Auradicals Foundation coach, Sam Ansumana who before the match was confident and hopeful his squad would have continued their good run of form to lift the title.

He said: “Things went out of our control, we were at the top during the start of the game especially before and after the goal. We are disappointed to suffer such a defeat.”

In his appreciation message, Liberals Elders Council Coordinator, Alhaji Abu Komeh thanked all those who made the anniversary football event a success. He said the work accomplished and the comportment displayed cannot go unrecognised.

“Thanks go to all those clubs who have celebrated with us, without your support, we could not have reached this peak and also many thanks to our very passionate Supreme Council for their support. This highest layer of the Liberals structure has once again proven that they are with us and will forever remain to stand for the ideals of this brotherhood,” Komeh said.