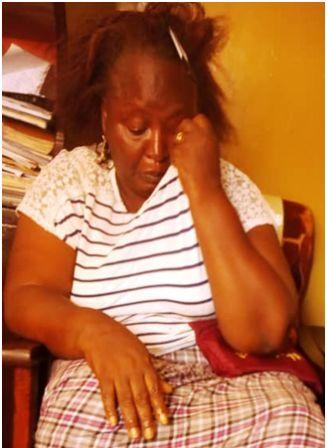 Woman Admits of Having no Legal Documents

Truth has been prevailed as the acclaimed house property owner; Madam Dolsy Lamin has revealed the fact that, late Mrs. Agnes Wurie commonly known as Grandma Agnes who is the rightful owner of the disputed house property at Adonkia did not leave any will or legal documents to ascertain that the property belongs to her as an adopted daughter.

Explaining her ordeals, Madam Dolsy Lamin accused Aunty Henrietta who is currently serving as the Power of Attorney in the matter as not connected to the issue for the fact that she said, Aunty Henrietta’s grandmother, Agnes Wurie is the sole owner of the disputed property adding that they were living at Wilkinson Road by Décor where her who was then dwelling at Mountain Cut left her with Grandma Agnes as an adopted daughter.

She explained that late Grandma Agnes handed over the four rooms self-contained house to her as her before she died but did not leave either a will or any other important document that could substantiate to her claim.

She explained in tears that Grandma Agnes died at eighty (80) years but none of her children or relatives showed up in her funeral arrangement. She explained that her father was a member of the Wurie family but her surname was changed by the late grandmother from Wurie to Johnson.  I was surprised to be asked by the children of the late Grandma Agnes to start paying rent. “I rejected to honor the payment of rent because I have live for quite a long time in the house and above all I was taking good care of the late woman in the absence of the children that are fighting me get rid of me today”, said the tearing woman .

Explaining his own side of the story, Leema Sandra Adjaye Rosenior said her mother; Gladys Ernestine Adeyome Rosenior was raised by her maternal aunt, Mrs. Agnes Wurie and argued that her mother possessed legal documents and statutes of declaration as proofs of ownership.

He said in December 2017, they paid visit in the house at Adonkiyya to find out why Dolsy Lamin is claiming ownership of the house and was furiously refusing to sign a Tenancy Agreement.

According to Leema Sandra Adjaye Rosenior, Madam Dolsy Lamin insisted that the house belongs to her and had papers to prove her argument and threatened to go through court.

“My mother was absolutely devastated and we were both astonished and speechless upon hearing Madam Lamin claiming ownership of the property”, he said and stressed that she Madam Lamin has no legal documents to back her claim except forged documents to support her fraudulent claim.