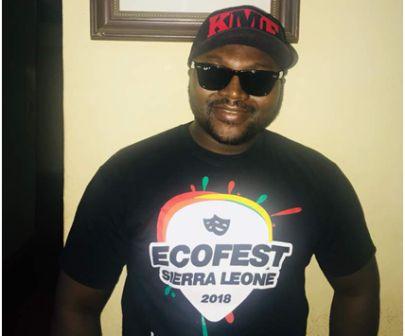 Reports say two of Nigeria’s biggest hit makers, Patoranking and  Mayorkun have penned down their signatures for the 16th November ECOFEST music showdown in Sierra Leone.

Sources close to the KME CEO, Abu Bakarr Turay –  The Kabaka (in photo) say the two artistes who have never been to Sierra Leone have already started rehearsing for a show they have both  described as the ‘New Big thing’ for West Africa. Fans would have the opportunity to see live stage performance of songs like  My Woman, My Everything (feat. Wandecoal); No Kissing Baby;  Available; Love You Die (feat. Diamond Platnumz) etc. Patrick Nnaemeka Okorie better known by his stage name Patoranking, is a Nigerian reggae-dancehall singer and songwriter. He hails from Onicha in Ebonyi State and was born and raised in Ijegun-Egba. Patoranking started his musical career doing underground collaborations with artists such as XProject, Konga, Slam and Reggie Rockstone. He signed a record deal with K-Solo’s Igberaga Records in 2010, releasing “Up in D Club” under the outfit. Patoranking became a protégé of Dem Mama Records after collaborating with Timaya on his song “Alubarika”. In February 2014, he signed a record deal with Foston Musik and released “Girlie O”, a single that put him in the limelight. He has a collection of awards to his name in Nigeria and abroad. Mayorkun, born Adewale Mayowa Emmanuel is a Nigerian singer and songwriter. He rose to the limelight in 2016 with the release of the song “Eleko” which hit over 1 Million views on YouTube 9 days after it was published and also topped the iTunes chart as number one.

Mayorkun quit his banking job to pursue Music as a career.

However, his mum would not hear of it. She had told him on several occassions that he should pursue his banking career. She changed her mind when Davido called him. She was there when Davido called him and she said: “wow this is big, maybe you should give it a trial”. Thereafter, Davido signed him up to his record label, the HKN Gang Label.

He had recorded a song using his cousin’s piano in late December, 2015 and he shared it on social media late January 2016. Davido saw the song on February 1. Then he followed him and sent him a direct message via Twitter. He later followed him on Instagram and asked if he can do more than playing the keyboard. He then sent Davido some of the songs he had done. He picked on one that he recorded while still in school and told him ‘guy I am signing you on’.

Mayorkun won the 2016 Nigerian Teen Choice Award for New Song of the Year, the City People Entertainment Award for Most Promising Act of the Year and The Headies ‘Rookie of the Year’ award. Some of his hit songs are: Bobo ft Davido, Che Che, Mama, and Love You Tire Ft. Mr Eazi.