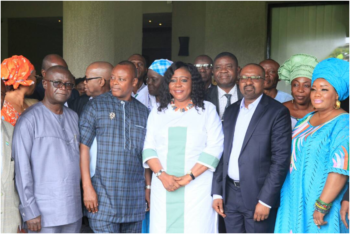 Speaking at a Seminar held for Ambassadors and High Commissioners by the Ministry of Tourism and Cultural Affairs in collaboration with the Ministry of Foreign Affairs and International Cooperation, at the Radisson Blu Mammy Yoko Hotel Conference Hall in Aberdeen, Freetown, the Hon. Vice President Dr. Mohamed Juldeh Jalloh said one of the key priorities of the ‘New Direction’ is to diversify the country’s economy on good footing hence the identification of new avenues to generate revenue.

One of these avenues, he said, is tourism adding that tourism is one of the world’s largest industries as it contributes immensely to the socio-economic development of a country.

Speaking on the theme of the seminar “The Role of Sierra Leone Diplomatic Missions/Embassies in Promoting Tourism,” during his keynote address, the Hon. Vice President called on all the newly appointed Diplomats to embark on a drastic paradigm shift from having political missions and embassies that are essentially there to entertain ministers, politicians and other government functionaries to that of maximizing impacts of promoting Sierra Leone’s positive image.

Speaking on the role of government in promoting tourism, the Hon. Vice President revealed that the ‘New Direction’ Government is working on improving policy in the area of Visa free, visa on arrival, reviewing of taxes on air ticket, landing fees, entertainment complexes among others.

Other areas the government is working on, he maintained, is that of security on political stability in the country, infrastructure-working on restructuring Government Wharf to become a hub for sea transportation, construction of two jetties and the Lungi Bridge to expand the frontiers of the capital and also link the city to other parts of the country.

The Hon. Vice President further went on to address the Diplomats on the expectations of government in the area of tourism, which he stated was to sell the positive image of the country and that they should be abreast with the strategic priorities of the ‘New Direction’ with a solid information, facilitate accessibility for tourist, business people to locate the country easily, map out potentials areas that will be of benefit to the country and be efficient.

In his statement, the Minister of Foreign Affairs and International Cooperation, Dr. Alie Kabba said that, the President His Excellency Julius Maada Bio is fully committed to the realization of the promises made by the ‘New Direction’ Government and that, the presence of the Hon. Vice President Dr. Mohamed Juldeh Jalloh speaks on the importance of the theme of the seminar.

Minister Kabba informed the gathering that, as a government they are going to divert their attention from mining to tourism as the mining sector has not proved any dividend to the country’s development. He went on to state that, as a government, they have viewed and credited tourism as the road map to development, that will foster the growth of the country’s economy.

He called on the newly appointed Ambassadors and High Commissioners to have in mind that they are representing over 7M people whose aspirations were to live a better life. He encouraged them to embark on potential activities that will help decrease the dependency rate of the country and develop a spirit of selling the country positively so she can become a shining light to the world.

Ambassador Designate to Germany, Dr. Mbaimba Bayoh in his speech described tourism as the bed rock of the country’s development, as the country is blessed with natural landscape and other tourist attractive places and activities.

The Representative of the Dean of the Diplomatic and Consular Corps, in his remarks outlined some key actions that the government should embark on areas that will attract investors/business people and tourists. These key actions he mentioned were the construction of the Lungi bridge, reasonable air tickets and the environment. He called on government to take advantage of the Bunce and Banana Islands.

The Minister of Tourism and Cultural Affairs, Mrs. Memunatu Pratt described Sierra Leone as a nation that is endowed with diverse and immense natural, cultural and historical resources. These potentials, she said, if harnessed properly can tap into enormous opportunities that have benefited by other emerging and developing countries with far less attractive attributes.

Minister Pratt went on to highlight some of the attractive tourism potentials that Sierra Leone can boast of which among them, she stated, are the agreeable and tropical year round sunny climate, the ideal location of the country which can be accessible within 5-6 hours flight to Europe, its miles of pristine, unspoilt white, golden and sandy beaches with mountainous backdrop and spectacular view, it diverse Natural Parks and Forest reserves such as the Outama Kilimi National Park, Gola Rainforest, Loma Mountains, Tiwai island and the Mamuta-Mayosso Wildlife Sanctuary.