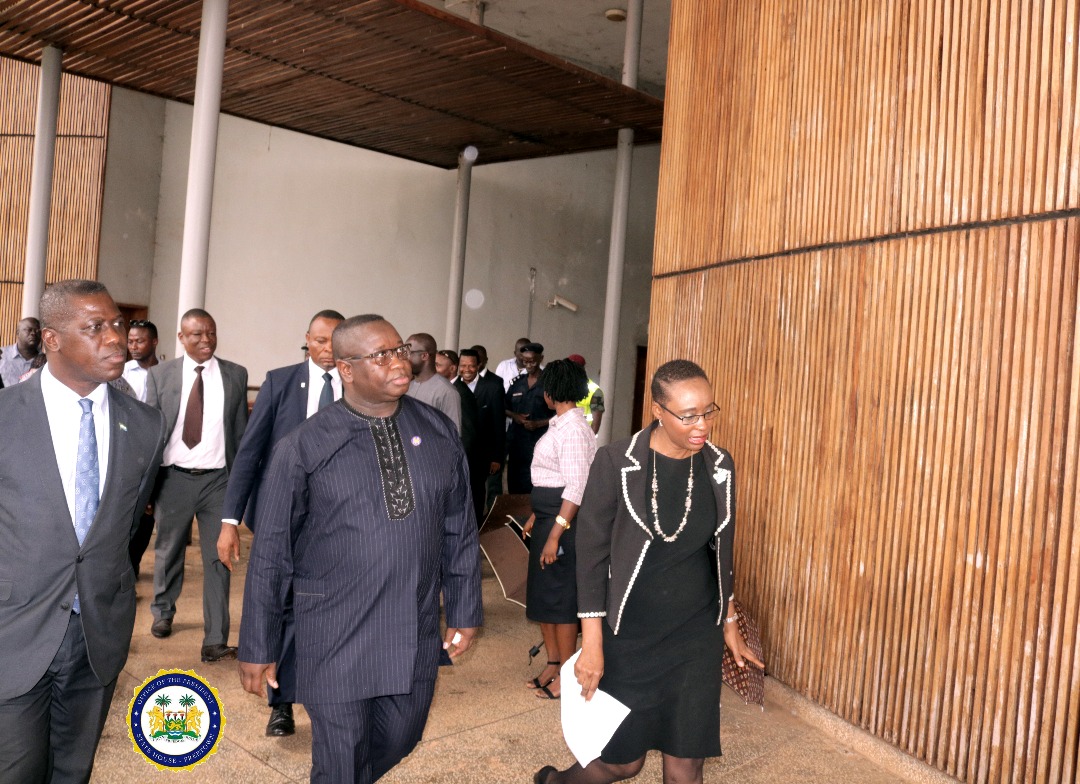 State House, Freetown, Monday, August 27, 2018 – His Excellency President Julius Maada Bio has conducted an inspection tour of the former Special Court Building in Freetown where he was received by the Attorney General and Minister of Justice, Madam Priscillia Schwartz (in photo).

While welcoming the President, Madam Schwartz said that the building was constructed by the United Nations and other International Partners under the aegis of President Dr Ahmad Tejan Kabbah-led Sierra Leone People’s Party (SLPP) Government. She noted that the facility, which brought perpetrators of the civil war to book, was built to bring lasting peace to Sierra Leone as it is with the present government’s plans to bring corruption to an end in the country.

The Attorney General and Minister of Justice also disclosed that the once illustrious ground court room with fine trimming and splendour that helped to win justice for the people of Sierra Leone had suffered yet the worst assault by the previous All People’s Congress regime, adding that building suffered from mismanagement, neglect, vandalism, decay and corruption as was with most of the country’s institutions and the economy under the previous regime.

“The proud halls of justice which once attracted huge numbers of tourists and the finest legal minds from all over the world now represent decay. The detention facility was handed to the government of Sierra Leone in early 2010 and the rest of the premises including the courthouse and all its facilities were handed over to the APC government in superb working conditions in December 2013. Then in superb working conditions, the court had computers, streamers, chairs and all modern facilities of international standard before it was handed over,” she recalled.

On the present condition of the court, the Attorney General added: “Sadly sir, you again inherit today a dilapidated courthouse. It is a hurt and stain on our country’s pride. This casts a dark mark on the previous regime for its disregard not only for the justice institutions but also for the rule of law. As you tour the courthouse and the other facilities, I pray that your leadership will take another bold step to set your divine seal afforded you by God Almighty on our justice institutions which lie in decay all around the country, including our overcrowded prisons”. “Our administration has inherited the burden yet again to heal the wound on the arm of our justice system and institutions and to alleviate the profound distrust of the public in them. The weight rests on your shoulder and all of us to show our people and the international community who poured monies into the building that justice is indeed a precious gem in Sierra Leone’s Coat of Arms by resurrecting this holed ground yet again,” the justice minister added.

She also noted that while adhering to the call by the public for the commencement of the Commissions of Inquiry, she was saddened that the said inquiry might not take place at the building, as was first anticipated, due to the high cost of refurbishment estimated to run into billions of Leones.

“Your Excellency, the poor state of the building has caused some delay in the commencement of the commission as we seek alternate facilities that will meet the financial cost, security and other logistics needed to get it running. Once the logistical details have been finalised, hopefully very soon, we will commence the Commissions of Inquiry,” she ended.