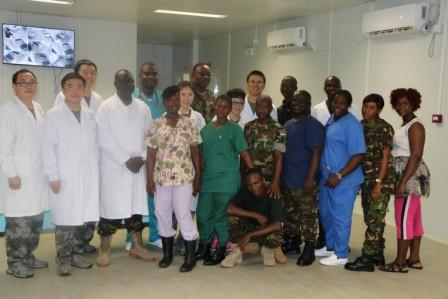 The Infectious Disease Prevention Center at 34 Military barracks built with support from the Chinese government has started full service operation to the public on August 22 2018.

In July this year the facility was commissioned by both H.E. President Julius Maada Bio and Ambassador WU Peng to deal with emergency disease outbreak in an auspicious occasion held at the Wilberforce military barracks which was attended by local and foreign dignitaries.

Dr. XU Zhe, Team Leader of Chinese People Liberation Army (PLA) medical term explained that, the facility was equipped with ultra-modern medical equipment to prevent and fight infectious diseases and that the centre was marked as one of the best in terms of emergency disease outbreak like Ebola and Lassa Fever.

Dr. XU said the facility also do diagnoses for HIV & AIDS, Malaria, typhoid, lung infection, TB and Hepatitis A, B &C, noting that malaria and TB test were free and that they also give some drug to patients on free of charge basis. He pointed out that the money generated from the services they provided goes into the running of the facility which he said was 100 percent owned by Sierra Leone but that they were just there to manage it on behalf of the country and to make sure that it was in good condition. He said they have generators to run the center in case there was a power shortage and that they also have water treatment center that treat all the waters from the facility so that it will not contaminate the surrounding areas.

“We are here to help Sierra Leoneans because China and Sierra Leone are very good friends” Dr. XU said.

In terms of the management of the hospital Dr. XU explained that, the centre was divided into sections of out-patients and in-patients with 30 beds available to admit patients who come to the hospital for treatment. With regards to staff capacity he revealed that there were four doctors and 20 nurses of both Chinese and Sierra Leoneans military medical staff who jointly worked at the hospital on daily basis and that they have the capacity to treat 60-100 patient per day. He noted that each ward was fitted with separate toilet and shower facility to create comfort for the patients that were admitted to a particular ward.

Dr. XU said the establishment of such facility diseases like cholera would be effectively dealt with within the hospital. He said they also have teleconference center within the hospital wherein they can consult with Chinese medical expert in terms of complex cases.

Ramking J Smith, who was at the bed side of his wife who was admitted at hospital said the treatment they were receiving at hospital was very good and that his wife was the first patient to be admitted in the hospital.

“The doctors and the nurses are doing well as compared to other hospital in the country even in terms of private hospitals the services here are very good” Smith confidently said, noting he hopes his wife would recover soon.