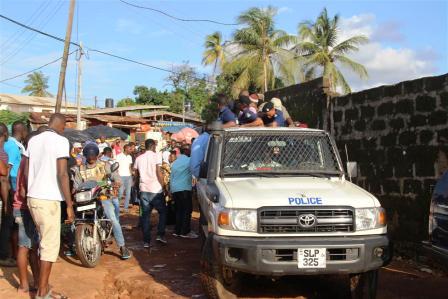 10 August 2018: The Minister of Social Welfare, Gender and Children’s Affairs, Ms. Baindu Dassama, The Executive Director of the Legal Aid Board, Ms. Fatmata Claire Carlton-Hanciles and The Commissioner for the Children’s Commission, Ms. Laggah have in a joint press conference held in the Conference Room of the Lumley Police Station in Freetown on Friday, August 10 pledged to work together to ensure justice is served in the ongoing police investigations into the botched child marriage. (Photo: Police storm the mosque to stop the marriage)

The press conference follows the aborting of the marriage ceremony at the Fula Mosque in Grassfield, Lumley in the West of Freetown on Thursday, August 9 by staff of the Board and the Police. Ms. Dassama said since this is the first case of child marriage brought to her attention, she will do everything in her power and within the law to ensure it does not happen again.

She said she will be meeting with the Chief Justice to discuss the matter. She added that Sierra Leone is a country of laws and that the law will be followed to the letter. ‘I was surprised when I came to the police station yesterday and family members of the child bride were begging for forgiveness but this is a matter nobody can stop,’ she stressed.

In an interview with the child bride prior to the joint press conference, she said she is the second in the family of six children. She could not tell the age of her elder sister. Also, she could not tell when she got married. There is a strong feeling within the Board that the sister could be a victim of child marriage.

How did we get to this point? The Legal Aid Board office in Freetown was thrown into panic following a call from a partner in Grassfield, Lumley to Ms. Carlton-Hanciles at about 3:00 pm that a marriage ceremony was being planned for a girl child at the Fula Mosque at Grassfield, Lumley. According to the partner, the marriage ceremony was going to take place at 4 p.m. The source added that the child lives with her parents at Grassfield. She is a pupil of the Wesleyan Primary School in Lumley and sat this year’s National Primary School Examination (NPSE).

With this information, the Board was convinced the child is not above fourteen.  The Assistant Community Relations Officer of Board, Ben Turay who has an official motorbike was dispatched immediately to the area to keep an eye on the preparations and provide update to the office while the police were being mobilized. Ben got to the scene within fifteen minutes and confirmed worst fears that preparations were in top gear as almost two hundred guests had converged on an address at Grassfield for the ceremony.

The Board’s Public Relations Officer Mr. Derek Nat-George and Assistant were also dispatched to the scene. The Assistant should film the area from a distance. The six Paralegals in Freetown were also deployed in the area.

While the staff deployments were going on, Ms. Carlton-Hanciles contacted the Director of the Criminal Investigations Department (CID), Chief Superintendent Tommy to brief him on the matter and further requested that the police be dispatched to the mosque at Grassfield to arrest all those participating in the ceremony including the officiating Imam.

Ms. Carlton-Hanciles also called the Minister of Social Welfare to brief her on the matter and the action that was being taken by the Board. While all of this was going on, the partner continued to provide regular update on the preparations.

When the stage was all set for the marriage, a team of police officers from the Lumley Police Station stormed the mosque and made four arrests. This includes bridegroom, Mamadu Alpha Jalloh who is twenty-seven and lives at Babadori, a male guest who obstructed the police, the bride’s mother, Fatmata Binta Barrie and a female guest who posed as the bride in an attempt to deceive the police. In a meeting with Detective Assistant Superintendent, Mustapha Gogra of Lumley Police Station on August 10, Ms. Carlton-Hanciles urged him to arrest the sick father and put him on bail. ‘The Father was aware of the marriage and consented to it,’ Ms. Carlton-Hanciles said. She also called for the arrest of the Imam and the others who officiated the marriage. As the investigations commenced, Ms. Carlton-Hanciles deployed the Board’s Juvenile Lawyer, Mr. Joel Deen-Tarawally at the Lumley Police Station to provide legal assistance and also help the police with the proffering of charges.

The Minister of Social Welfare, Gender and Children Affairs, Ms. Baindu Dassama visited the Lumley police station in the evening of August 9 to lend weight to the ongoing investigations and to impress upon the police that justice must be done at all cost noting this is a test case for her Ministry.