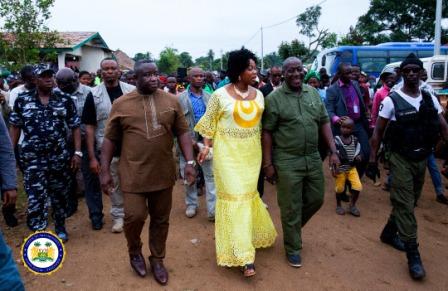 Matru Jong, Bonthe District, Saturday, 11 August 13, 2018 – Residents of Bonthe District have gathered at the weekend to welcome His Excellency Julius Maada Bio to his hometown, for the first time since his election in April as President of the Republic of Sierra Leone.

The event which took place at the Mattru Jong Town Barry was attended by a lot of dignitaries including Her Excellency the First Lady Fatima Bio, Members of Parliament representing the region, traditional leaders and other stakeholders in the district.

In his welcome courtesies to the President, Paramount Chief Alhaji Ali Badara Sheriff of Jong Chiefdom said they were pleased to receive their son who had risen to the highest seat in the land. He said despite all the discriminations and intimidations from the previous government, Bonthe district always remained relentless and committed to bringing their son to power.

Member of Parliament, Hon. Alice Kumabeh of Constituency 92, who spoke on behalf of her colleagues in the district, said they were excited as indigenes of Bonthe to see one of them as President. She thanked God for the opportunity, adding that: “Maada has been here a lot of the times but this visit is a special one for us, as it is the first one we are receiving him here as the President. The struggle was a tough one but thanks to everyone for their relentless support to bring our brother to governance.”

She assured of their support as a district and the determined to support the new administration of President Bio for what she said would be a total transformation of the country.

President Bio thanked the people of Bonthe for their unrivalled support to elect him as President, noting that he received his highest votes from the district in terms of percentage. He said he was proud of the support he received from his home district and which he said had shown that they were ready for the presidency.

“I told you all that despite being the smallest district in the country, we must show determination that we were serious about our candidate, and indeed your votes showed that you had decided to join the other parts of the country to elect me as President. This visit is to thank you and to show my appreciation for all the support you have given me over the years,” he said.

He mentioned that now that he had been elected President, his immediate task would be, like for all other neglected areas of the country, to map out strategies that would develop the district and the entire country. He called on the local authorities to provide the leadership in developing the district which had been neglected over the years. He promised that his government would bring development to the district.

President Bio closed his statement by pleading with the district and its people to lead by example and conduct themselves in a disciplined and law-abiding manner.

Photos from the event shown below