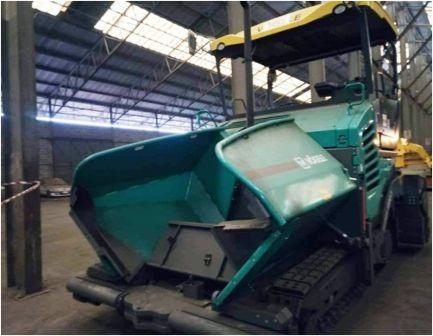 Mohamed Dollar Bangura, Clearing agent of the said equipment, confirmed that the state of the art construction machineries which recently arrived at the Quay were imported by the PAVIFORT Construction Company.

In an exclusive interview with this medium, CEO Alimu Barrie disclosed that in a bid to timely complete all their on-going road works, it was indeed necessary to import new machines as well as other materials in order to fast track construction work. He disclosed that they brought in 19 containers, 15 of which contain Bitumen (Asphalt used to make roads – Tar) to be used to complete road works in the Kabala township and  on the 5 and 10 kilometer roads of Makakura and Krubola.

He further stated that despite the challenges in constructing the Kabala township road, he been able to spend over 60 million dollars which was utilized to purchase construction equipment like pavers, rollers and bulldozers so as to facilitate the complete construction of the road work. He maintained that since his company embarked on road construction they have made landmark achievements in infrastructure and such laudable achievements are in the Sierra Leone Roads Authority’s records.

It could be recalled that on the 18th August 2017, after the twin disasters of Mudslide/Flash floods, Pavi Fort deployed 3 excavators and workers at the Regent site to help with the rescue and recovery work and also donated Le25 million to the relief efforts of the government in the affected areas. It was also part of 3 indigenous Sierra Leonean Construction Companies that constructed 52 houses at Mile 6 in Western Rural District.

The completed buildings were on the 16th January 2018, officially handed over to the Government. This move was seen by many nationals as an indication of real patriotism. This patriotism was further displayed by Pavi Fort in the recent National Cleaning Day exercise. Alimu Barrie deployed workers and machines in Freetown and Kabala simultaneously on that day and they performed excellently, much to the appreciation of the public. According to the CEO, this is not only about his company’s Corporate Social Responsibility, but is a display of how passionate he is about his country and the well-being of all citizens.

During the conducted tour it was discovered that the company has the manpower and machinery to finalize the construction of the 20 kilometer road and the various dignitaries commended them for doing a very impressive job in the township. They further praised the company’s capacity (in terms of machinery) to perform such a job within the stipulated timeframe. Some stakeholders say that Pavi Fort will go into the history books as the country’s first indigenous construction company to complete a 20 kilometer road within the terms of its agreement signed with Government despite the challenges.