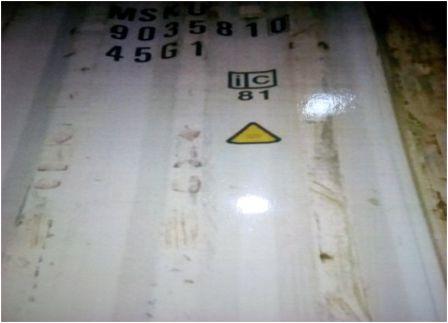 Maersk Line SL Limited, one of the country’s shipping agencies refused to take responsibility for the damage occasioned on a 40 foot container whilst in their custody en route to Sierra Leone, and has been viewed by many concerned citizens and the victim, Madam Fatmata Dalaba Kamara as unacceptable. The company’s excuse for not taking responsibility is that the damage was occasioned by an Act of God, Typhoon ‘Hato’ does not exonerate them from taking responsibility.

According to the victim the incident took place last year. She maintained that when the goods were examined in China in her presence and in the presence of the shipping agency’s officials, everything was found to be okay. And the container was locked for shipment to Sierra Leone by Maersk Line.

However when the container arrived in Freetown, it was reliably learnt that the captain of the ship made a formal complaint to the shipping agency of the damage to the container.

When the container was opened in the presence of the owner, Madam Fatmata D. Kamara, the goods inside were discovered to be wet and damaged. She further explained that she consulted a lawyer who wrote the shipping line on the matter asking for compensation for the damage but their reply was that the damage to the container was as a result of a Typhoon ‘Hato’ which hit South China on 23rd August 2017 and the heavy rain and water which eventually damaged the consignment is an Act of God and as a result Mersk will not take responsibility for the damage, quoting several clauses of the Maritime Code of China and Maersk Line terms for carriage.

Madam Kamara further stated that the money she used to buy the goods and do the shipment was a loan taken from the bank and she will have to pay back same to the bank regardless of the damage she has suffered.

She is calling on the government and all the bodies/stakeholders dealing with sea transportation and shipping agencies to intervene and enable her to get justice.

Other concerned citizens say that she should not be allowed to suffer the loss, especially as the goods were at the time of the damage, in the custody of the shipping company. Some social commentators say that if the goods had been contraband goods, the company would not have taken responsibility but would have directed the authorities to the lady.

To get the other side of the story, this medium made efforts to talk to officials at Maersk Line in Sierra Leone but to no avail.