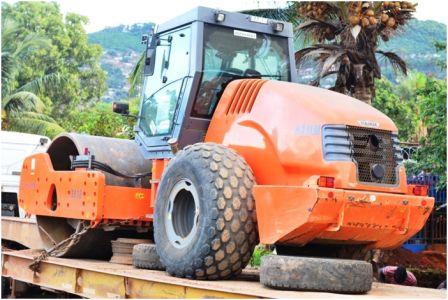 Unlike other road construction companies before and now, Pavi Fort-Sierra Leone, wholly owned by Sierra Leoneans is proving each day that they are here to do marvelous, lasting road works at affordable cost and in record time.

A clear case is that of the people of Koinadugu and Falaba districts who are full of praise for Pavi Fort Sierra Leone that has not disappointed them but demonstrated that they can perform far better and even more than the so-called international companies contracted by the government to build roads and drainages do other developmental jobs which Pavi Fort-SL is professional at doing.

The Chief Executive Officer Pavi Fort Sierra Leone, Alimu Barrie, is a young Sierra Leonean who like President Bio has a vision of alleviating the troubles and pains faced by road commuters and is poised to do all he can to support the government build better and longer-lasting roads for the whole country.

Quite recently, the CEO’s exploits in Koinadugu and Falaba districts saw Pavi Fort completing 20 kilometers of road in record time in the two townships.

Even the Paramount Chief of Wara-Wara Yagala Chiefdom in Koinadugu District, PC Gbawaru Mansaray III boasted that because of Pavi Fort-SL, his township is the proud owner of the best roads in the whole of Sierra Leone because they are of very high quality in terms of materials used and workmanship. Even the Resident Minister North, Abu Abu Koroma could not hide his good feelings about Pavi Fort-SL. He informed a large gathering that President Bio’s government is ready to provide support and the political will for local construction companies like Pavi Fort-SL to build roads and other infrastructure in the country in conformity with Local Content Policy.

He said: “Our government is ready to support Pavi Fort-SL because Pavi Fort-SL is very cooperative in implementing the Local Content Policy which seeks to boost Sierra Leoneans and indigenous businesses.

Meanwhile, all rumors doing the round saying negative things about Pavi Fort-SL have been proven to be pure lies. It is government that actually owes Pavi Fort-SL for services the company rendered to the government on credit.

However, the Resident Minister said he was very impressed with the work of Pavi Fort in Kabala so far, noting Pavi Fort-SL is demonstrating that it has the capacity and ability to compete with and defeat foreign companies doing the same work in the country.

The Paramount Chief of Wara-Wara Yagala P.C. Gbawaru Mansaray III said they have the best township roads in the country with 20 kilometer of tarmac roads.

The work of Pavi Fort in Kabala is very impressive and we are happy about their performance. The government needs to look at what the company has done so that more support will be given in this direction. Pavi Fort has the capability including man-power and machineries he said.

Pavi Fort Chief Executive Officer, Alimu Barrie told the gathering the company is now able to compete with other international road construction companies in the country.  We are proud Sierra Leoneans and our company has what it takes to do road construction in every part of the country and around the world.

“As a company we have completed the work in the township of Kabala but work is still ongoing in Maka Kura-Misingbi Road, and Kabala to Korubunla Road and Gaya junction from Kono to Kabala, in the Falaba District.

We have proved our worth with the task at hand as we are now capable of challenging any road construction work. We have the equipment and the technical ability. The company is bringing in more machines daily and the reason why Sierra Leoneans should trust their own local companies in this direction. The machines that we have are more than the work we have”, he said.

Mr. Barrie said despite the challenges the company was able to pre-finance the work. We have brought in new machines costing over Sixty Million dollars.

He called on the government to help talk to the banks for soft loans that will enable local companies carry out their work efficiently. He maintained that as long as Pavi Fort-SL has the blessings of President Bio and the people of the two districts, the company will surely rise to higher height.