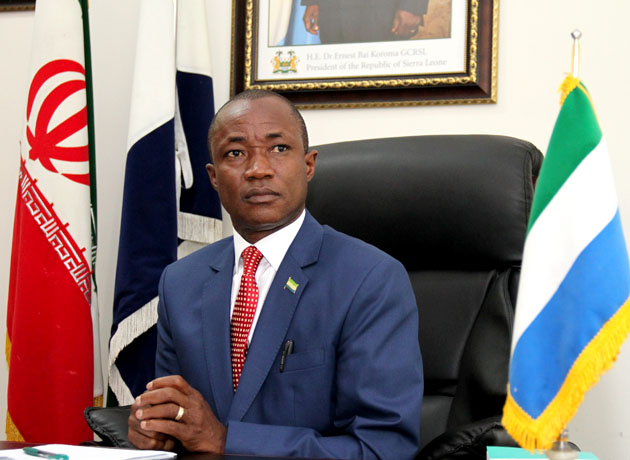 The Sierra Leonean Ambassador to the Republic of Iran, Hon. Alimamy Kamara has expressed dissatisfaction over the manner in which the government of President Bio is bastardizing the Vienna Protocols regarding repatriation of diplomats.

The Sierra Leonean diplomat made the confession during a popular program called “Morning coffee”, at the Sierra Leone Broadcasting Corporation (SLBC) on the 21st June 2018.

According to Ambassador Kamara, the Ministry of Finance and Economic Development (MOFED) has not being fair to them concerning   their welfare issues which he said is very disheartening for all the Sierra Leonean diplomats representing Sierra Leone in various countries around the globe.

He expressed their willingness to return home and contribute to national development if the necessary procedures regarding their repatriation are duly followed.

He noted that, President Bio is fully aware of the due process of repatriating Sierra Leoneans who have served as diplomats according to the laws of the land and that they are still waiting for an official repatriation package from MOFED.

He said that they have also been deprived of their usual facilities supposed to have due to the use of automated system in most foreign missions across the globe including accessing energy supply, pure drinking water, residential bills, hospital bills, rental fees among other emergency charges.

He condemned the earlier press statement made by MOFED in which it was claimed that the government through the Ministry of Foreign Affairs and International Cooperation (MOFAIC) have arranged all repatriation process for Ambassadors and Press Officers calling it as baseless and untrue because according to him they supposed to have one official vehicle and a forty feet loaded container of personal belongings.