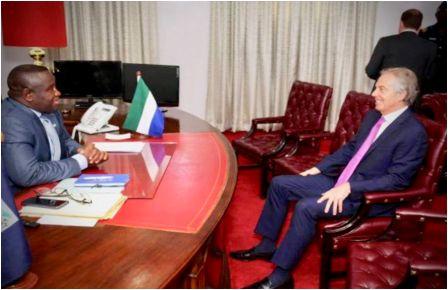 Surprise, surprise!  Tony Blair has wasted little time in getting that vital photo shoot.  There he is sitting boldly in front of our newly elected President offering him his hollow congratulations and professing to admire his actions already taken to make Sierra Leone a better place, so we are told. But, is this not the same man who boasted that since 2008 his Institute has supported the EBK APC Government of Sierra Leone to reduce poverty and improve lives?  In his website, he tells the world that his team of embedded advisors worked shoulder to shoulder within a range of line ministries supporting the delivery of government priorities.  (Photo: l-r President Julius Maada Bio and Mr. Tony Blair)

HIs main claim on Governance is that he works with governments and leaders of fragile, developing and emerging States to enhance their effectiveness.  In my earlier article, “We yeri Yaing” I observed on his silence during those troubling times when our Constitution was under threat in the quest for an extension of the administration and despite his close relationship with our ex-President we have just witnessed a serious attempt at preventing the Will off our people for a change of Government resulting in an extended period of Elections that served to cripple our governance for about a month.  But for the Grace of God, he would have been sitting in front of his protege, or his chosen successor ready to continue their programme.

The Question must be, did Tony Blair apologised to President Bio and the people of Sierra Leone for his failure in the style of governance that he clearly upheld?  As a privileged NGO who was allowed to be part of government without being voted in by the people, he was accountable and when the APC government was voted out, he should have realised that his in-house NGO was being similarly rejected.

As an ex-Labour Prime Minister, he seems to be held in low esteem by the Party that he once led and transformed for his own benefit and they resent his enriched lifestyle in the same way as ex-President Ernest Bai Koroma is being judged by his own APC Party.  They are two of a kind and it would be folly of mega proportions for the Bio Presidency to rush to emulate that arrangement.  We are a proud people that should not have to rely on an individual, but rather enjoy a government that seeks to work with other governments and International Organisations to develop our country.  Remember the days of Jamil and that APC government!  What is the point of holding Elections and having such eminent and capable Ministers appointed if we then have to rely on Tony Blair to ensure our prosperity.  He has tried in the past to get the British Government to channel their actions through him and rightly failed.  What is the point of maintaining a Diplomatic Corps if we are not going to work with those proper agencies?  In particular, The United Kingdom is in the process of leaving the European Union in March 2019, known as Brexit and plans to extend Trade with the rest of the World.  Here’s the rub; Tony Blair does not believe the British people were sensible in that democratic vote and seems to be arguing for a reversal.  However, Brexit will happen and our Government should be making plans to take advantage of those trading opportunities.  Instead of Tony Blair, we should be working through the British High Commissioner to secure an early visit by the Trade Secretary, Dr Liam Fox, or even the Foreign Secretary.  We should leave Tony Blair in no doubt that our future lies in taking such constructive initiatives that he clearly does not believe would be in our interest, or that of the United Kingdom.

I also wondered, did they talk about Education?  When in government, Tony Blair famously said his policy was “Education, education, education” and did not follow that through.  We welcome our new President’s determination to educate our people, which is long overdue.  If Tony Blair attempts to claim credit for that, as he most probably would in the future, he must be reminded that President Bio adopted that course without his precious guidances. That is what Africa needs at this pivotal time as a new crop of leaders emerge that will ride the new tide of political progress and maturity that we are seeing in several countries in Africa.  It is noteworthy that most leaders rejected the advances of the Tony Blair Institute as he tried to forge a foothold across the Continent without employing qualified African staff who would better understand our problems and our people.  Sure, his father was a junior visiting lecturer at FBC, but we cannot grant him perpetual control over our national destiny because of that.  Rather, let us learn to celebrate those illustrious indigenous lecturers of much greater stature that have contributed to our Academic well being over time.

Before some might play the other card of Sierra Leone being saved by Tony Blair, he must not forget that the current President knows a bit more about our civil war and what really happened on the ground.  If only General Gobi had received the modest Logistical support he needed from Tony Blair, the Nigerians could well have prevented many deaths and finished the war sooner, most of which they and the UN Forces had fought.  They took Freetown without any inevitable collateral damage to the very State House in which the rogue photo shoot occurred.  Successive British Prime Ministers have failed to recognise, or thank the thousands of West African soldiers particularly from our country and Nigeria, or the one and a quarter million Indian soldiers who were either wounded, or gave their lives fighting alongside British forces in both World Wars.  They do not intend to thank us properly and we should rise above any slavish if not misinformed continuing gratitude and move on.

As an NGO, Tony Blair should be willing to engage in local public media Debate, so that people understand his thinking and the extent of his involvement in our country, including any possible Business aspirations and can thus hold him to account.  A quick day visit followed by dinner is not sufficient to run a country.  And if he is not doing all this for nothing, we would be interested in being told the true cost to our depleted public finances.  How many of his staff were embedded in Government and, indeed, who are they and who vetted and approved their appointment?    It is bad enough having to control the various other NGOS without being ruled by one of them.    It is a revealing experience to read his website to see where I am coming from.  We voted for Change and Tony Blair must be part of that Change.  Enough is enough.