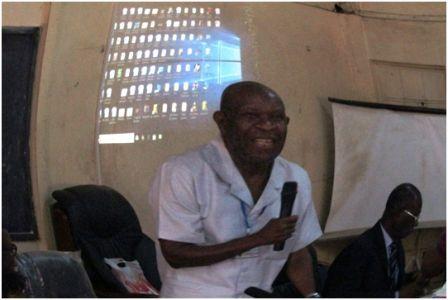 The Government Consultant Pathologist, Dr. Simeon Owizz Koroma has stated that metal seats commercial vehicles are the major cause of death in road accident.  (Photo: Dr. Owizz Koroma delivering his lecture on the impacts of metal seats)

Dr. Koroma made the disclosure when he was making a power point presentation on the impacts of metal seats at the Sierra Leone Road Safety Authority (SLRSA) headquarters on Kissy Road in Freetown.

to remind the Drivers’ Union of the intended ban on the use of metal seats which have proven counter- productive as more people die as a result of their use in our commercial vehicles. Dr. Koroma expressed that he was happy for the sensitization that was going around against the use of metal seats but sadly enough election put the entire sensitization and implementation of the ban into a recess, he further expressed.  In his presentation, he described metal seats as a major contributor to death when accidents occur, noting that they have direct and indirect impacts on people and the country at large. “As Pathologist, I have seen it all in the exercise of my duty during the postmortem exercises I perform’’, the old man stated.  He added that most of the deaths that occur during accidents are as a result of metal seats. He called on SLRSA to enforce the ban on metal seats to save lives.

In 2013, SLRSA had a survey on the impacts of metal seats and in 2017 the authority placed a ban on metal seats and gave the drivers’ union so much time to get their members replace the metal seats with the soft ones the authority recommended. By 2018, it was expected that all the commercial vehicles would have complied but the sensitization was over taken by the electioneering processes and no attention was paid to the December deadline.

According to the President of the Drivers Union, Alpha Bah, the ban is a step in the right direction. He expressed his dissatisfaction over the poor supply of the soft recommended seats saying that they are expensive and difficult to get since the recommended supplier was unable to meet their demands.

Safer vehicle as a pillar in the United Nations Decade of Action on Road Safety, according to observers, needs urgent attention if the SLRSA and Drivers’ Union are serious about saving the lives of people in the country. Inside sources at SLRSA disclosed that the initiator, Dr. Sarah Bendu would have enforced the metal seats ban fully if she was not unduly sent on leave by the previous government.SLRSA Board Secretary, Sama Gamanga has expressed the need for compliance to the metal seat ban which according to him, will be fully enforced when the new Transport Minister takes office in earnest.