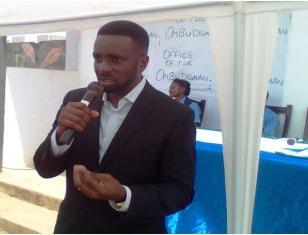 Inhabitants of Port Loko District have honored the Ombudsman of the Republic of Sierra Leone, Melron Nicol Wilson (in photo) to mark his one year in office.

Idriss A. Kargbo, a Legal officer would be the immediate head of the said office respectively.

The Ombudsman Mr. Melron Nicol-Wilson Esq. has said in his statement that, the opening of the office marked another milestone in the history of country adding that the new office will not only serve Port-Loko town and its environs but would also serve both Kambia and Karene Districts respectively.

He furthered that; the office of the Ombudsman is an independent institution established by the Ombudsman Act No. 2 of 1997, empowered to investigate complaints from the general public that have suffered injustice as a result of maladministration.

He described his office as neutral and impartial adding that the Ombudsman receives complaints related to injustice and maladministration from people who feel that they have been treated unfairly by either government, Ministries, Department and Agencies (MDAs), institutions as well as parastatals.

“The Ombudsman office also has power to investigate, criticize and make recommendations accurately with prudent action” he said adding that his office also demands any information file or document against a complainant or require any official to provide relevant information to justifies and take prompt action to resolve the problem within the appropriate time, he concluded.

In his statement, Executive Secretary for the Office of the Ombudsman, Dr. Sheku Sorsor Conteh said they have established offices across the country to focus their operational wings closer to the newly established district.

He said before now it was only one office at Makeni in Bombali district in the north east of Sierra Leone where people made their complaints.

They commended the Ombudsman to continue focus on the promotion of the local content policy in recruitment of staff within the three districts adding that the creation of the office in that part of the country has seriously relived them from indiscipline.

They expressed fear and appealed to the Ombudsman not to be rubbish with unnecessary and described his appointment as Ombudsman was never a mistake.

They called on the Ombudsman to embark on serious sensitization to educate the districts.

The ceremony was climaxed by the crowing of the Ombudsman as Chiefs Pa Kombra Bai by several Paramount Chiefs.