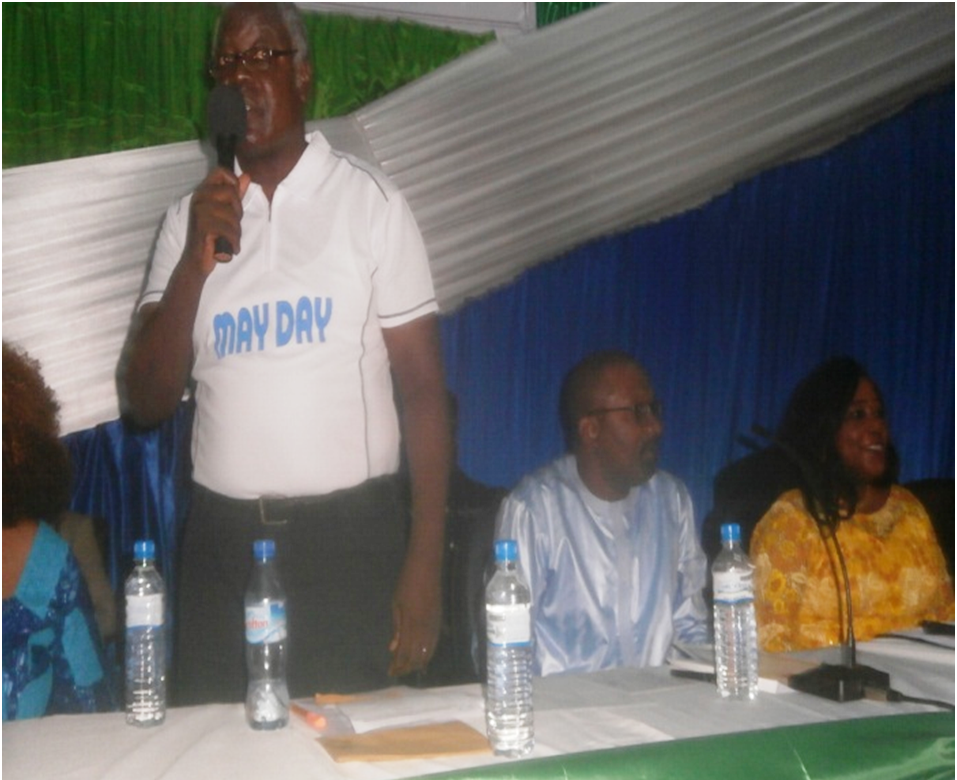 As collaborative effort is one which Sierra Leone needs after the reconciliation of post-election conflicts, the Sierra Leone Labour Congress (SLLC) has joined forces with CARE International to celebrate and observe the International Workers Day (May Day) in Sierra Leone with the theme: “End Gender Base-Violence for Sustainable National Development”.

In her opening remarks as Chairperson of the occasion, Dr. Memunatu Pratt who also doubles as the Designated Minister of Tourism and Culture (MTC) said May Day is a recognized holiday internationally to advocate for workers’ rights in general and that is why the date is celebrated every year on the 1st of May.

Madam Pratt stated that, the theme for this year celebration which says, End Gender Base-Violence for Sustainable National Development is a step in the right direction for the Ministry of Labour and SLLC in their fight to eradicate all forms of gender base violence across the country.

She said, women and girls are the double victims of Gender Base-Violence in work places and even in communities without any prompt action to protect their rights and dignity adding that women are the most God fearing people in governance affairs because according to her, women are less corrupt than their male counterpart for several reasons and that when a female is well informed no man can cease her rights.

She expressed profound gratitude to SLLC and CARE International for partnering at this moment in observance of the international workers day and mentioned that government should ensure women issues are addressed especially in the area of capacity building which she said will increase women participation in governance.

She affirmed that the new direction will restructure the country’s economy within short period for Sierra Leoneans to enjoy better social services as a nation and that everybody must give his/her own maximum support to the new administration for the development of the country.

In his keynote address, the Vice President of the Republic of Sierra Leone, Dr. Juldeh Jalloh, representing the President elect, Retired Julius Maada Bio said three years ago, the government of Sierra Leone has already declared May 1st as a national holiday like other countries in the sub-region and that the international workers day is a special day to celebrate the gains made by workers across the country.

He assured the gathering that, the theme for this year celebration which says that, Ends Gender Base Violence for sustainable national development will not only stop here but the new direction will rather form a commission on Gender Base Violence affairs to further reinforce the fight against gender base violence in the country and the commitment of the government of Sierra Leone under the leadership of Retired Brigadier Maada Bio, he said will be a thing of the past.

He said gender base violence is a key challenge for government but he however maintain that government will undertake whatever step to encourage constant engagement with SLLC through the ministry of labor for the improvement of women, girls, disable and other dignified Sierra Leoneans. In his short statement, the President of SLLC, Jennings .A.B. Wright said another May Day has come and on behalf of the Executive and the entire membership of SLCC, which is the “Umbrella organization of all workers”, in Sierra Leone and thank all those present as they join their compatriots the world over to commemorate and celebrate the numerous achievements most often at great perils for the advancement of humanity and economic prosperity on this day known as the, “International Workers Day “commonly called “May Day”.

He noted that, the theme for this year’s celebration: “End Gender Base-Violence for Sustainable National Development “symbolizes Sierra Leone Labour Congress’s avid attention for gender parity in all spheres of human Endeavour in the country adding that, this is why the congress call  on the government to consider gender parity in its appointments of public officials and that the congress similarly urges the government as a first step in this direction to ratify all ILO conventions relating to the promotion of gender parity.

He inform the Vice President of the republic of Sierra Leone who represent the President Elect, Retired Brigadier Julius Maada Bio and other partners that the Sierra Leone Labour Congress is one of the social partners of government and for this he said they have been keenly following government’s activities in relation to the wellbeing of every citizen.

Mr. Wright said, they as workers are saddened and deeply worried on the current state of affairs Vis-à-vis Lawlessness, hooliganism and intimidation going in the country adding that they bring to the attention of government that the Sierra Leone Labour Congress office was on Thursday the 26th April, 2018, between the hours of 12: 00 noon and 2:30 pm was thronged by unspecified thugs and hoodlums that attacked and put the office under siege, disrupting normal work of the congress.

The President of SLLC added that, there are several reports of similar incidents across the country and this if unabated is not a testament to preserving our democratic gains and that it’s nothing but a recipe for national chaos.

He ended by extending fraternal greetings on behalf of the Sierra Leone Labour Congress to the leadership and membership of our affiliated unions, our international partners, employers and to the Government and People of Sierra Leone for the support and solid collaboration with the congress over the years, Long live workers’ Solidarity, happy May Day to you all, SLLC President.

Representing CARE International, the country Director, Everest Sindayigaya express happiness to SLLC for recognizing them on this important celebration and that CARE international will continue to provide the necessary support in the fight to end gender base violence in Sierra Leone.

He assured SLLC of their unflinching support in the future for the eradication of Gender Base-Violence and also will continue to engage other sectors to advocate for the inclusion of more women into governance for rapid economic transformation of the state.

Speaking on behalf of 50/50 group, the Public Relation Officer, Madam Zainab Tunkara Clarkson told the gathering that international workers day celebration for 2018 is for women and girls who are more vulnerable to Gender Base-Violence in Sierra Leone and that the 50/50 group appreciates the action of the new administration for the fair inclusion of women into ministerial appointments and other national responsibilities.

She appeals to Sierra Leonean to work together for the development of the country and that 50/50 group will continue to engage Government and donor partners on the fight to eradicate all forms of Gender Base-violence against women and girls in Work places and learning institutions across the country as theme for this year state, “End Gender Base-Violence for Sustainable National Development”.