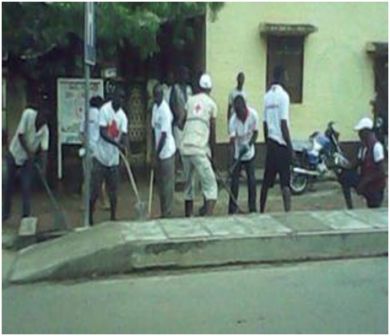 Speaking to Sierra Express Media in an interview, Koroma maintained that he has also set up a committee to sensitize citizens on the essence of the national cleaning adding that as a council, they are always ready to receive any new government as far as development is concerned.

Koroma further spoke on the new Bye-laws and commended President Julius Maada Bio for what he described as a vital initiative to promote hygiene in the country.

He emphasized on the huge challenges surrounded the first national cleaning of Bio’s Government but quickly mentioned that they have done a lot as a district to meet the demand of the people.

He cautioned Headmen to encourage their subjects to see the need for them to support whole heartedly the new initiative and congratulated the Drivers Union, Sierra Leone Armed Forces, Sierra Leone Police, members of the Sierra Leone Peoples Party (SLPP) and supporters in other political parties for their effort to maintain democratic and good governance.

He concluded by calling on the Government to support the council with more vehicles.

As garbage takes over Freetown Pas...