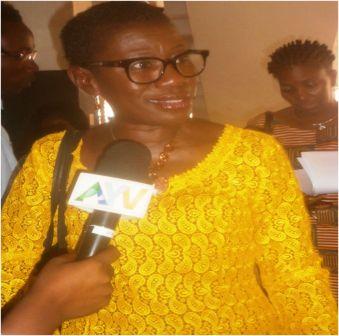 This was brought to the attention of the public during the graduation and exhibition ceremony for 260 women and youths trained in waste management and plastic recycling from various slum communities including Old Wharf, Culvert, Cockle Bay, Funkia, Congo Town, Oloshoro, Crab Town and Juba Bride at Miatta Conference Centre on May 2nd 2018.

In her opening remarks, the designated Minister of Development and Planning, Nabela Tunis (in photo) was Chairperson of the occasion maintained that plastic waste is an issue which is posing serious challenges especially in slum areas of Freetown adding that plastic waste is not only unpleasant but also hazardous to human health.

She said the behavior and perception of people in terms of waste disposal and management in urban and per-urban areas is a recipe to natural disaster such as flooding and discussed on the danger of dumping waste into the sea or water.

The minister emphasized on the increase of plastic producing company in the country and spoke on the need to salvage the issue of waste management with the involvement of line business organizations and other relevant bodies.

“UNDP has been very supportive in collaboration with local organizations to train women and youths in slum communities”, said the minister and described the occasion as a means to showcase how we can transform our waste into something productive.

She told participants that as a Government, they would not only like to see the full participation of plastic manufacturing companies into the process but they also want to see strong legislation is develop to prevent people against the indiscriminate dumping of plastic waste in the street and ended by congratulating all those who put hands and ideas together to develop such a vital initiative.

In his presentation, the UNDP Country Director, Samuel Doe said reports has revealed that Sierra Leone is extremely vulnerable to environmental and climate related challenges and reiterated that plastic waste is the major cause of flooding especially in the Freetown municipality.

He urged the current Government to prioritize the issue of climate change as was done by the previous administration through the Agenda for Prosperity and described plastic waste as becoming a global phenomenon.

According to Mr. Doe, plastic has economic value and huge health and environmental implications and talked about the vulnerability of Sierra Leone to climate change.

Her Lordship, the Mayor of Freetown, Yvonne Aki Sawyer buttressed that slum communities are susceptible to flooding and other natural disasters adding that the project does not  only deals with sanitation and waste management but also provides employment among men, women and youths.

She spoke on the need to ensure we do things to improve job creation and protect the environment and advanced that as the mayor of the municipality, waste management is one of her priorities.

She warned against the indiscriminate dumping of waste into the sea to protect the aquatic environment. “I will engage UNDP and development partners for more progress to be done in the area of sustaining the business”, she asserted and deliberated on the need to have a policy that would kick against the indiscriminate dumping of waste materials. She urged organizers to continue with their good job of protecting the environment.

The Environment Protection Agency representative, Mr. Jalloh stated that plastic waste could live for hundreds of years in the environment because, he said, it is biodegradable. He condemned the use of plastic as fuel to burn charcoal because, according to him the smoke the victim inhales is a dangerous pollutant that may result to Cancer and described the project as another big step in the fight against the deadly Cancer.

Mr. Jalloh assured that they have met with plastic producing companies and that they have expressed willingness to support the initiative and spoke on the important to empower our locals with the required skills to properly manage waste materials.

He said there is a political will for the fact that the initiative would provide job for many young people. He said as an agency, they also have the issues of used oil in garages and electronic waste like computers and musical sets which he said are causing many health problems.

Mr. Jalloh called on community people to continue protecting the new initiative which he described as community driven.

The Director of Disaster Management in the Office of National Security (ONS), John Vandi Rogers lauded UNDP for supporting what he described as a welcome initiative and talked about the environmental hazards facing slum communities.

He said about 14 natural disasters which are related to flooding have been recorded since 2014 in Sierra Leone and mentioned that such disasters have caused displacement of people and increased poverty. Mr. Rogers described the initiative as in line with disaster management.

“The sustainability of the project and policy formulation is our aim and focus”, said the Director and discussed on the need to showcase the product for people to see the experience that has been put together. He said the initiative is a positive approach to reduce poverty and concluded by assuring that they would give the required support for all of us to achieve a common goal.