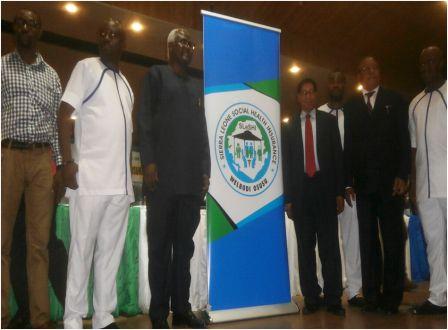 The latest of President Koroma’s Health Initiative before leaving office was the Health Insurance Scheme which aimed at a free Health Insurance Scheme for Children under twelve years and the aged over sixty five years old. At a press briefing held in the information and communications Ministry weeks back, the National Social Security and Insurance Trust (NASSIT) Coordinator, Mr. Joseph Kamara promised that all mechanisms will be put in place to ensure that the scheme is implemented for the benefit of both young, adolescent and the old but, a change of government is now the subject of a controversy as to whether it will work.

Although the Insurance Scheme was launched by President Koroma as a monthly Le 15,000 for the Informal Sector and Le 60,000 for the Formal Sector, the scheme had not started its operations, Mr. Kamara Said among other things that for those living in provincial towns and Villages as it’s still not known whether they would have to pay their dues to their respective paramount chiefs or village headmen. Another controversy stems from the fact that it was still not known whether the beneficiaries will benefit from a free medical checkup with the provision of free medicine or they have to pay the cost of their medication.

Another hesitation Contested by the public was that when President Koroma Launched the Free Health Care delivery on the 27th April 2010,few months later, a lot of dishonest practice were reported in this sector.

The Health Insurance Scheme also stands a testing period for its surround, NO body knows whether the new government of President Bio will consider it as a lucrative initiative geared towards the health needs of the population or equally dawn it as an initiative that will be improperly implemented if given the go-ahead for NASSIT and those who had it time will decade its future.