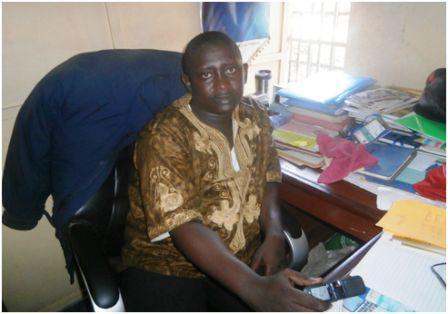 The complaint was made at a meeting held at the Sierra Leone Labor Congress (SLLB) wherein a cross section of members of the SLPP executive was in full attendant last Thursday.

Responding to an exclusive interview, the National Secretary General of the National Marketing Organization, Hassan Samakarr Kamara stated that the main purpose of the meeting was to explain to the public that after the March 31st 2018 Presidential Run-off election was won by the SLPP, violence was perpetrated against traders by supporters of the ruling party across the country. He said they are still inundated with phone calls explaining about the prevailing violent meted against them as their tables and chairs were reportedly broken down, money and business items were stolen with threatening remarks.

“I met one of the SLPP strong women, Fatmata N. Momoh and made bitter complain for the fact that some traders are afraid of coming out and do their business as a result of fear of been harassed, Said the Secretary General and alleged that the SLPP supporters who are in the habit of attacking Abacha Street Traders are coming from the party office.

Samakarr explained that the women were calling for a peaceful protest against the SLPP hooliganism. During the process, Samakarr said, the Spokesman in the Office of the Vice President, Alieu Sow intervened and he told him about the intensity of the incidences that resulted for many of them to be hospitalized. He concluded by calling on colleague traders to come out and deal in their businesses because he said, the SLPP executive has assured to maintain calmness..

The President, Council of Traders, Alhaji Mohamed Bureh Kamara described the meeting as the right step to solve their frustration and assured colleague traders that their voices would be heard and concerns would be addressed. He stressed that they as traders saw a bitter experience after SLPP won the Run-off and advanced that traders should not be punished for supporting the APC because they have their right to belong in any political party.

In a frustrated mood, the President complained that their Chairman in Bo has fled and his house was set ablaze for politics and recalled that the traders contributed greatly for the late former President Koroma to win the 2002 Presidential election against the outgoing President Dr. Ernest Bai Koroma.

He said after winning the election, the SLPP Government introduced Operation Free Flow and emphasized that traders are peaceful people who could not stand in the sight of blood.

The Vice President of the NATIONAL Trade Council, Gibrilla Turay aka Prezo Gibo stressed that there is a pain of destruction in their minds and mentioned that their market tables in Kenema were used to mount checkpoints. He said in Bo, about 132 tables damaged while in Magburaka, the son of one of the market chairladies was beaten to death.

He deliberated that a burnt palm oil was thrown on the husband of one of their chairladies and described democracy as about peace and togetherness and condemned the way and manner traders are normally targeted in any riot. He concluded that they would continue to support and work with the current Government.

Responding to the complaint, the Western Regional Chairman for the SLPP, Manso Dumbuya said there would be no problem with Bio’s presidency and argued that all what had happened to traders is not caused by traders but by their brother Sierra Leoneans.

He said such attitude could not take the country forward but backwardness and reminded traders that for the past ten years, they were supporting the APC Government and underscored that African politics is not civilized like the European politics.

“Your protection is my paramount concern because I am your father”, said Dumbuya and stressed that all what is happening is not in the knowledge of either the President Bio or Vice President Mohamed Juldeh Jalloh.

He admonished all to avoid provocation and respect the rights of each other and prayed for such menaces never to reoccur and encouraged traders to take demonstration as the last resort because he said, it could not solve the problem.

“Give us your support because we cannot succeed as a Government without your support”, he appealed to traders and spoke on the important to love each other for better Sierra Leone.

He concluded by calling on traders to tender their complains through the right channel to avoid demonstration and mentioned the Police are there to protect the Government of the day.

The SLPP Regional Chairman, North-West, Ambassador Dr. Umaru Bon Wurie recognized that indeed traders were aggrieved and emphasized that only lawless supporters could perpetrate such unruly and unacceptable behavior to give Government bad name.

He said the Government has taken positive step to engage stakeholders across the country to foster peace and put to an end the prevailing violence.

The Vice President for the Sierra Leone Traders Union, Lansana Vandy called on the Government of President Bio to respect traders so that we can embrace ourselves as people in on nation. He also emphasized on the calls he has been receiving from brutalized traders in Bo and Kenema.

The Second Vice President, Trade Council of Sierra Leone, Foday Sahid Kamara said their hearts are broken because anytime there is politics, traders are targeted and emphasized on their previous plan to go in the street and protest for the world to see and know what is happening to traders in Sierra Leone.

He discussed that, not all traders that voted for the APC, others thumbed up for the ruling SLPP adding that some of their colleagues in Bo and Kenema have runaway and concluded that they needed protection as how they are ready to work with the Government.

Reading the communiqué issued in violence perpetrated on traders nation-wide during and after the 2018 general elections, the Secretary for the trade Council of Sierra Leone, Fuad Mansaray said they strongly condemned the violent attack on its membership nationwide.

He said the Council reminded Government of its sacred responsibility to protect its people against harm and undue provocation adding that as an umbrella organization representing traders across the country called for a meeting with His Excellency the President Retired Brigadier Julius Maada Bio, and the Vice President, Juldeh Jalloh in order to explain the plight of traders and put modalities in place to alleviate the suffering of our affected members.