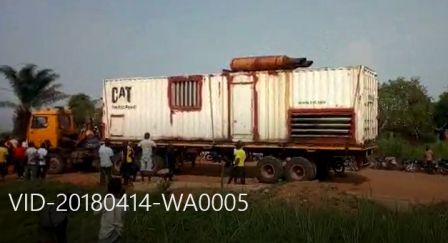 One of the Thermal Generators was installed by the APC Government was this afternoon loaded on a truck to be transported reportedly to Bo by SLPP operatives.

But with the timely intervention of irate youth, the thermal generator was taken back to the Koidu Power Station.

According to the driver of the truck, they were given specific instruction to take the power plant to Bo to boost electricity supply during the pending OBBA celebrations.

However, some clueless SLPP supporters unsuccessfully tried to spread information that the instruction was given by the APC to remove the generator from the township; forgetting the fact that the APC is no longer in charge of running the State not to talk of giving such an instruction when it was the same APC Government that brought electricity to the District after 30 years.

“What a stupid and unreasonable way to think when it’s very clear that APC is no longer in power hence does not have any authority to give such an instruction. It is very clear that the SLPP is now implementing its plan to plunge the entire Kono District in ‘Blackout’ like it’s happening now in the capital Freetown,” one C4C supporter remarked in anger.