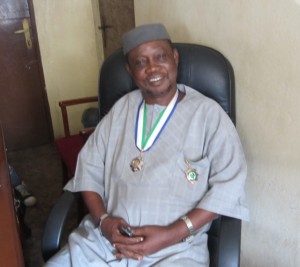 SLPP Poises to Capture APC Stronghold in the South

Over 20,000 voters in the Ribbi Bumpeh Chiefdom in the Moyamba District are jubilating over the appointment of Paramount Chief Charles Caulker (in photo)  in the transition team of President Retired Brigadier Julius Maada Bio.

A Spokeswoman, Madam Isata Turay from Rotifunk, Capital of Bumpeh Chiefdom revealed to this medium that both Bumpeh and Ribbi Chiefdoms previously amalgamated as Constituency 86 now Constituencies 93 and 94 after the deamalgamation have for 34 years overwhelmingly for the main opposition APC party. But those two chiefdoms are the most vulnerable.

She said from Frances S. Mohoi who was the first APC MP in the early 70’s to Hon. Amadu Kanu who is the substantive MP, nothing absolutely has changed, the two chiefdoms are deserted by their young generation, even though the public protested against the award of the APC symbol to Hon. Amadu Kanu who is now serving his third term the APC hierarchy could not yield and there are no assurances of improving their situation ever if they fail to change their voting habits.

The spokeswoman says PC Charles Caulker was a college mate of Ex-President Ernest Koroma, he is always criticize by his people in the Sherbro community for associating himself with President Koroma who appointed him as Chairman of Paramount Chief and was the Southern Province representative commissioner of the Public Service Commission (PSC).

But PC Caulker had all rights to join the SLPP himself.  Historically, his father PC William Caulker was arrested and jailed by the APC Government of Siaka Stevens for allegations of allegiance to the SLPP party. She said Charles father died shortly after been released from prison.

The anti APC sentiment then shirted to the Sherbro community from Tombo in the Western Rural to the Bonthe District.

The Spokeswoman says that if PC Caulker is chosen in the Bio cabinet, they have no doubt that their aspirations will become true. Afterwards, the Caulker Family has demonstrated tolerance to migrant families more than a century back.