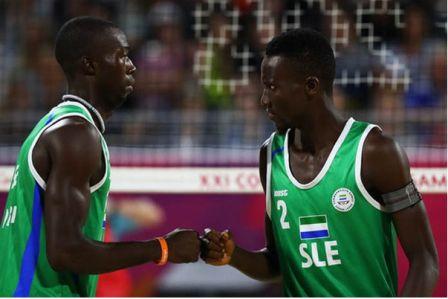 Sierra Leone’s only hope of winning a medal in this year’s Commonwealth Games was shattered on Tuesday evening following the elimination of the national male volleyball side by host nation, Australia at the Goolangantan beach court.

The Australia duo, Schumar and Mchugh advanced into the semi-finals with a two straight win 21-12, 21-14 after some brilliant display of tactics, experience and precision much to the delight of the noisy home crowd.

Sierra Leone’s Patrick Lombi and Abu Bakarr Kamara were not at their best and eventually paid heavily for not being able to block the balls well.

Australia outstanding player, right attacker Schumer said they played as a team, very fast and clinical owing to the fact that Sierra Leone is the fastest improving team in the tournament.

“They worked very hard to get here, great guys who need exposure. For me, it is a learning experience for them and they need that sort of exposure to make them great,” he said.

Assistant coach, Andrew Scheart said they were nervous after the draw was made. “It was a big challenge playing against a side that did so well in the World Championship six months ago, so we played them with respect.” He said

He disclosed that they put the young Sierra Leonean side under intense pressure making sure that they have easy balls dropping on their end. He said despite the home support, they worked hard to arrive at the semi-finals by defeating a very strong team in the competition.

On his part, Sierra Leone’s coach Sorie Kamara heaped blame on his boys for not executing the game plan. He added that lack of concentration throughout the game was a key factor for their defeat. “We spent enormous time trying to work out strategies that would have seen us sailing through, but my boys failed to do their assignment well and they paid heavily for that,” he said.

Coach Sorie admitted that his boys must be exposed to certain aspect of the game. According to him, there is nothing new they can learn at home emphasizing that they would continue to be the best all the time.

In a related development, the Sierra Leone cyclists did not make it into the final road work of the competition after failing to make up the grades in the preliminary rounds at the Currumbin Square yesterday. Alie Kamara was ranked 51 riding on a time of 1 hour, 9 minutes, 14 seconds while his colleague, Mohamed Keita did not participate.

By Musa Sesay In Australia