On this day gone by – Bio hands staff to Kabbah 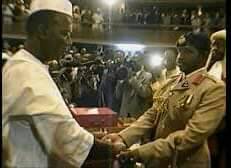 On this day gone by – Bio hands staff to Kabbah

On this day gone by: Brigadier Julius Maada Bio (in photo-right) ceased to be Head of State of the Republic of Sierra Leone under the National Provisional Ruling Council military junta government. That came to pass 22 years ago today March 29, 1996.

Bio led a military coup in Sierra Leone on January 16, 1996, ousting his close friend and the leader of the NPRC junta government, Captain Valentine Esegrabo Strasser.

Born in Tihun, Bonthe District, southern Sierra Leone, Maada Bio is the Sierra Leone People’s Party’s presidential candidate for the 2018 presidential runoff election scheduled for March 31, 2018. Bio was elected as the SLPP candidate at the party’s convention held on October 15, 2017.

53-year-old Retired Brigadier Julius Maada Woonie Bio was the SLPP presidential candidate for the 2012 presidential election.  He handed the staff of office (I witnessed the ceremony on the grounds of Parliament) to Alhaji Ahmad Tejan Kabbah who was sworn in as President of the Republic of Sierra Leone on this day gone by.